US wary of Iranian influence in Latin America 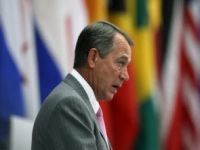 The Speaker of the House of Representatives, Republican John Boehner, has expressed concern about the expansion of Iranian influence in Latin America and claimed that Iran's presence in this region is a major and significant threat.

During a conference held Tuesday at the U.S. State Department, John Boehner said that a possible rift between the U.S. and Latin America could threaten unity and democracy in the region, saying that, "The U.S. government needs to intensify its cooperation with Latin America to stop Iranian expansion."

Referring to the last visit of Iranian President Mahmud Ahmadinejad to Latin American countries, he said that "the visit of the Persian to the region reveals that Iran has plans to increase its influence in Latin America."

He noted also that the Iranian president's visit to Cuba and Venezuela stressed Iran's interest in expanding its ties with the current governments in the Western Hemisphere.

He warned against "voices" of both the Democratic Party of President Barack Obama and Republican advocates of reducing cooperation with the region to stop aid to countries like Colombia and Mexico. He urged U.S. authorities to increase their direct cooperation policy with Latin American countries.

Boehner, who welcomed the ratification in October in the U.S. Congress of the free trade agreements with Colombia and Panama, said the goal now should be to achieve a continent with "free market, free trade and free citizens" and thereby the U.S. can compromise with Latin American countries.

The increasing trend of public opinion in Latin America to the progressive governments in the region has considerably declined U.S. influence, and thus the government in Washington has lost many regional allies.