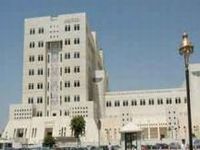 Syria said on Saturday (28th) that the highest authorities of Turkey have issued provocative statements to worsen the internal situation in this country, affecting bilateral relations and contradicting the plan of the Special Envoy of the UN, Kofi Annan. A statement from the local Foreign Ministry blames the Turkish Prime Minister, Recep Tayyip Erdogan, and his foreign minister, Ahmed Davudoglu, for promoting this policy.

"We recall that Syria has never threatened the Turkish border, since it considers Turkey as [a country] a friend and neighbor," the statement read.

"It is worrying that Erdogan threatens to call upon NATO to protect its border, to the extent that this issue no longer requires a serious commitment to the points of the Annan plan," says the Syrian ministry.

The statement adds that removal of the good neighbor policy by the Turkish Prime Minister to adopt a method of intensification of the crisis and, by accommodating armed terrorist groups who have no faith in the political process, also causes alarm.

The note holds Erdogan responsible for using the situation of the Syrians affected by the crisis and that are on Turkish territory to worsen relations between both countries.

"Instead, authorities should use their good offices to help refugees return, and Syria is willing to cooperate with the Turkish Red Crescent in this sense," it adds.

About Syrian-Turkish relations, the Secretary of Defense of the United States, Kathleen Hicks, told the Congress that Washington is working on an alternative initiative to the UN plan, which, she says, is doomed to failure.

Hicks, in turn, proposed in a Senate hearing that the Pentagon consider the possibility of mobilizing troops on the Turkish border with Syria in order to "create a security zone."

"We are planning different strategies for a wide range of possible venues, including the ability to help our allies on the border zones," Hicks argued.