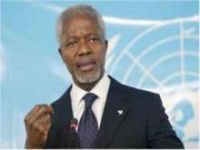 The Syrian government has accepted the plan proposed by the UN special envoy and the Arab League, Kofi Annan, for a solution to the conflict in that Arab country, the world organization confirmed on Tuesday (27th).

In a statement, the office of the spokesperson of the United Nations indicated that the decision of the authorities in Damascus with respect to the six-point initiative by Annan was communicated in writing.

For his part, also, the former UN secretary general urged the government of Syrian President Bashar Al-Assad to implement its commitment "with immediate effect."

Annan found that the Syrian government's response to is suggestions is "an important first step that can lead to the end of violence and bloodshed" in that country.

He added that it also allows the provision of aid to those affected by the crisis and creates "a favorable environment for political dialogue which will satisfy the legitimate aspirations of the Syrian people."

"The implementation of the proposal is essential not only for the people of Syria, stuck in the middle of this tragedy, but also for the region and the international community," Annan said, according to the announcement, signed by the official spokesman for Annan, Ahmad Fawzi.

The envoy of the UN and the Arab League now acts urgently together with "all parties to ensure the implementation of the plan at all levels," the statement said.

The envoy expressed his appreciation for the extensive support received in his mediating efforts in Syria and calls "important countries" to contribute to ensure its effective implementation, the text concludes.

The note from Fawzi is posted from Beijing, capital of China, where Annan is as part of his actions related to the conflict in Syria.

The plan proposed by the Ghanaian diplomat provides for an end to violence by the government and armed opposition groups, the establishment of a humanitarian truce for two hours daily and the release of detainees.prisoners.

Another aspect points to seeking a peaceful arrangement for the crisis through an inclusive political process that addresses the concerns and legitimate aspirations of the Syrian people.

Annan's proposals received on Wednesday received the backing of the Security Council in a resolution adopted by its 15 members, including Russia and China who had previously vetoed two projects developed from the one-sided Western theme.

For this, the initiative proposes that the government stop troop movements to urban centers, stop using heavy weapons and begin the withdrawal of military concentrations.

Meanwhile, the special envoy "will be seeking similar commitments from the opposition and all of the relevant elements to end the fighting," said the second document of the Security Council.