Obama picked Medvedev to promise "more flexibility after the elections" 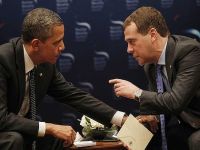 The conversation between Obama and Medvedev was caught by cameras and microphones.

The U.S. President, Barack Obama, was "caught" conveying a promise of "more flexibility" through the outgoing Russian President, Dmitri Medvedev, after the November elections in the U.S. to discuss contentious issues like missile defense.

Obama was criticized by Republicans, who say the President is making too many concessions to Russia to reduce nuclear arsenals.

At the summit, television cameras and microphones recorded Barack Obama asking Medvedev for "space" prior to the November elections. Medvedev said he would pass the message on to Vladimir Putin, who now occupies the presidency.

The exchange of comments was made without any of the leaders realizing that the words were being caught by cameras and microphones on the eve of the nuclear summit that Obama had called for a further resumption of negotiations to reduce the American and Russian nuclear arsenals, which has collided with the Russian opposition to the missile shield the U.S. wants to install in Europe.

This is not the first time that the American President's embarrassing comments are picked up by microphones: There was the November 8th exchange of opinions between Obama and French President Nicolas Sarkozy, on the Israeli prime minister, Benjamin Netanyahu, on the sidelines of the G20. "I cannot stand Netanyahu, he is a liar," Sarkozy had said to Obama. "You're tired of him, what about me, I have to deal with him every day?" Obama had retorted.

Obama's predecessor was also a victim of the microphones during a summit, this time at the G8 in Russia. His comment to the then British Prime Minister - "Yo, Blair" was the target of plenty of jokes in comedy programs, and the language as well.

With regard to the attacks of the Lebanese Shiite group Hezbollah on Israel, Bush said to Tony Blair: "You see the irony is what they need to do is get Syria, to get Hezbollah to stop doing this shit and it's all over..".