Iran calls for negotiated solution to Syrian crisis, without interference 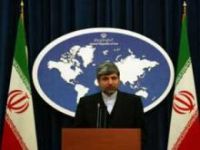 Iran affirmed on Friday (23rd) that they will support any plan that guarantees the claims of the Syrian nation and implementation of reforms announced by President Bashar al-Assad, but rejected interference in the internal affairs of Damascus.

The spokesman for the Iranian Foreign Ministry, Ramin Mehmanparast, said that the current situation in Syria should be resolved through diplomacy, avoiding any measure of interference and making hasty decisions.

Mehmanparast added that Tehran welcomed the plan of reforms promoted by Assad to restore stability and peace to his country, as well as paving the way to a dialogue for national unity.

The reaction of the Persian country came after the unanimous announcement made on Wednesday by the UN Security Council directed at ending the critical conditions that exist across Syria and stopping the violence from all sides.

In this sense, Iran also ensured that they support the work of the UN special envoy and the Arab League for Syria, Kofi Annan, who tries to resolve the crisis diplomatically.

Such postures, the spokesman stressed, fall within the six-point plan proposed by Annan that includes supervision by the UN of a ceasefire in the country located on the Mediterranean coast.

Likewise, the Islamic Republic rejected calls of some Western powers and Arab states to send more weapons to the opposition against al-Assad, namely the so-called Syrian National Council created in Istanbul, Turkey with the open backing of Turkey.

The proposal by the former UN secretary general also includes a cessation of hostilities for two hours daily to provide humanitarian aid to the needy, and the withdrawal of government troops and heavy weapons in the cities most affected. In equal manner, it advocates allowing access to all areas affected by confrontations.