Wild murderer whisked off to US protection

Sergeant who killed Afghan civilians
in the United States 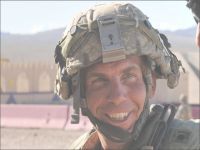 American sergeant, Robert Bales, accused of killing 16 Afghan civilians, was transferred Friday from a base in Kuwait to the military prison at Fort Leavenworth, Kansas, informed U.S. television networks.

Robert Bales, 38, was confirmed as the author of the massacre by a U.S. official, who asked not to be identified.

The military defense attorney John Henry Browne, told U.S. media that his client suffered a serious injury caused by a colleague one day before the massacre, but he had no animosity toward the Afghans.

"Researchers say that alcohol was a decisive factor in this incident," said a U.S. official who declined to be identified.

Afghan leaders demand that the suspect be brought before a court on account of the murders.

On Friday, Afghan President Hamid Karzai criticized Washington for the massacre, one day after saying that international forces should leave the villages of his country, endangering NATO operations, two years before the deadline for troops to leave Afghanistan.

Karzai also said that "the Afghan government has not received any cooperation from the United States to bring the author of the massacre in Afghanistan to justice."

"It already has taken too much time now. This behavior can no longer be tolerated. We do not ask for money, we want justice. It was an intentional act committed by American soldiers. We want answers when we ask why they killed civilians and demand they be punished."

U.S. President Barack Obama and Karzai reaffirmed this Friday, in a telephone conversation, the objective of withdrawing international forces in Afghanistan by the end of 2014.

Karzai revealed that Kabul was planning to assume security in the country from 2013 to replace NATO forces (ISAF), and not at the end of 2014, as predicted so far.

But according to a White House statement, the two presidents reaffirmed that "the Afghan forces will complete the transition process and take full responsibility for security throughout the country at the end of 2014."

The White House emphasized that, from 2013, "the direction of combat operations will pass progressively to Afghan forces" and that U.S. forces will have a supporting role.

The spokesman for the White House, Jay Carney, told the press that the two heads of state discussed "Karzai's concern of long standing about night raids and the searching of houses."

They pledged themselves to complete negotiations for an agreement that meets these concerns, added Carney, noting that the two presidents were of the same mind regarding the transition process in Afghanistan.

Karzai called on international forces, two-thirds of whom are U.S. military, "to be removed from Afghan villages and repositioned on their bases.

Ed. It's time for them to stop protecting this vile war criminal and trying to make lame excuses for his behavior. He must be brought to justice. Their big mantra is "he remembers little" of what he did.