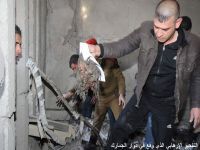 Two terrorist attacks rocked the capital of Damascus Saturday morning. The first took place in the Rotunda of Customs while the second occurred in the area between Baghdad Avenue and the neighborhood al-Kassa'a.

The Interior Ministry said in a statement: "Damascus on Saturday saw two terrorist attacks perpetrated by a suicide car bomb that caused the martyrdom of 24 people, and the remains of the bodies of 3 martyrs were found, while another 140 were injured. The victims are civilian citizens and effective forces of law and order."

The statement added that "the first explosion occurred at 7:20 a.m. in the Rotunda of Customs and a few minutes later came the second attack in Tahrir Square, which connects Baghdad Avenue and the neighborhood al-Kassa ' a, and both caused great destruction to residential buildings and cars parked at the sites of terrorist bombings, as well as huge losses and material damage."

"The competent authorities in the Ministry of the of the Interior are running tests and taking samples and pieces of bodies and remains of the explosive materials that were sent to the competent laboratories to determine the identity of the perpetrators of terrorism and the type of material used to carry out the blasts" explained the statement.

The statement added that "the Home Office says that these two terrorist attacks commit an outrage against the security and stability of the Syrian people, and took place in light of the escalation launched by regional and international parties, who recently made appeals to send weapons to Syria" ... the Ministry also states that it will "apply a tough hand on anyone who tries to strike the security, stability and unity of Syria and terrorize its citizens, and at the same time, directs an appeal to the international community and international organizations to assume their responsibilities, support the Syrian people and work to stop attempts to destabilize and strike at Syria its safety."

The Ministry also called on citizens to continue to cooperate with the competent authorities and report any suspected case and give any information they have on the activities of terrorists and their movements, which would contribute to the eradication of this evil alien presence in Syrian society and help preserve the lives of Syrian citizens.