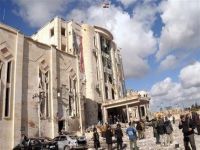 Death and destruction thanks to NATO and USA

Vitaly Churkin, Russian ambassador to the UN: "It is completely unacceptable. This practice is undermining stability in the Middle East..."

The Russian ambassador to the UN, Vitaly Churkin, has accused Libya of training and arming rebels fighting against the Syrian government of President Bashar al-Assad.

A reminder, with the assistance of NATO, terrorists in Libya are now conducting a wholesale business of training terrorists for export to wherever they might be needed, having been recent trainees of NATO themselves.

NATO used its considerable air power to pronounce them the "government" of Libya, while the terrorist "government" controls less than 85 percent of Libya.

The Russian envoy made ​​the accusation at a meeting of the Security Council yesterday, the fourth Monday.

"We have information that in Libya, with support from the 'authorities', there is a special training center for Syrian rebels, and groups are sent from there to Syria, to attack the legal government," said Churkin. He added: "It is completely unacceptable. This practice is undermining stability in the Middle East."

The charge appears after the website Wikileaks recently published a document that revealed that there are covert operations underway by U.S. and NATO forces inside Syria, against the government.

In a private message now released, an analyst working for the Texan company, Stratfor, says that in December of last year, he attended a meeting at the Pentagon where he heard that U.S. / NATO soldiers \were inside of Syrian territory, giving training to armed rebels.

On the 3rd Thursday, President Assad said that foreign troops were trying to weaken the Syrian government.

Since mid-March 2011, Syria has faced violence that has resulted in hundreds dead, including many soldiers and security agents.

Damascus blames "mercenaries, armed saboteurs and terrorists" for the assault, which, for the Syrian government, is being orchestrated from abroad.

The U.S. and several Western countries, including Britain and France, as well as Saudi Arabia, Qatar and Turkey, supported action against the Syrian government.