Russia asks the UN to verify the situation in Syria

Deputy Foreign Minister of Russia, Gennady Gatilov, on Sunday (19th) called for the United Nations to send experts to Syria to assess the humanitarian situation in the country. Syria is under a wave of violence for the past 11 months. The UN estimate is that about 7,000 people died as a result of the conflict. 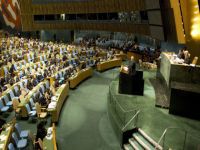 Last week, the UN General Assembly approved a resolution on Syria recommending an end to violence and proposing the overthrow of Syrian President Bashar Assad. The Syrian government rejected the resolution as a credible document without its approval and considered it as an attack on national sovereignty.

Russia is against the establishment of sanctions against Syria and sending a "peacekeeping force" of the United Nations for the country, without the authorization of President Bashar Al Assad.

In parallel, the government of Egypt on Sunday summoned its ambassador to Syria. The Foreign Minister of Egypt, Mohamed Kamel Amr said that the ambassador should be in Cairo for an indefinite period.

In the last 14 days, the Egyptian authorities called for "a real and peaceful change" in Syria and the immediate ending of violence, but rejected military intervention. Last week, the Arab League decided to give political and material support to the Syrian opposition and ask the Security Council for the formation of a joint force of UN and Arab countries to end violence in Syria.

The Syrian opposition has received money and weapons from the Western imperialist powers, Turkey and the Arab allies of the United States and Israel.

Interestingly, this body of obvious sycophants to the Empire refused to accept Russia's amendments to the Resolution which call for:

"all sections of the Syrian opposition to dissociate themselves from armed groups engaged in acts of violence" and urged countries with influence to "prevent continued violence by such groups."

The other demanded that the withdrawal of all Syrian armed forces from cities and towns - which was called for in the Arab League plan - take place "in conjunction with the end of attacks by armed groups against state institutions and quarters of cities and towns."

How utterly stupid and one sided, as always. How predictable. Let the ones causing all the trouble continue, the terrorists, without hindrance.

And only 12 voted no and 17 abstained? The rest of the countries are idiots that choose to live on their knees, or as the case may be, in ziofascist pockets. Interesting. Those that are not on the lists below deserve to suffer the fate they would impose on Syria, hopefully terrorists will knock on their door next.

12 Countries that voted against the resolution:

Translated from the Portuguese verion and appended by: