The last Turkish-'Israeli' tango in Syria 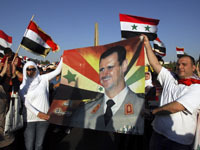 Turkey as a member of NATO has a longstanding joint military-intelligence agreement with 'Israel' which is explicitly directed against Syria. A 1993 Memorandum of Understanding led to the creation of (Israeli-Turkish joint committees) to handle "regional threats". Turkey and Israel agreed to cooperate in gathering intelligence on Syria, Iran, and Iraq and to meet regularly to assess terrorism and Syria, Iran, and Iraq military capabilities.

The position of the Turkish government on Syria is not popular in Turkey. Thousands of Turkish citizens protested on Friday 18th Feb at the gates of the Presidential Palace in Ankara, during the meeting between Turkish President Abdullah Gul and Secretary General of NATO Anders Fogh Rasmussen, denouncing the Turkish government's conspiring with the NATO and the US against Syria.

A diplomatic crisis erupted between Turkey and Syria when more than 40 Turkish intelligence officers were captured by the Syrian army. Over the past week, Turkey has been conducting intensive negotiations with Syria in order to get them back. Syria insists that their release will be conditioned on the extradition of Syrian officers and soldiers that defected and are currently in Turkey.

Syria also stressed that its continuation of the negotiations with Turkey is subject to Turkey's blockade of weapon transfers and passage of soldiers from the rebels' "Free Syria Army" through its territory. Syria demanded that Iran sponsor the negotiations of releasing the Turkish officers, Turkey rejected Syria's demands.

Syria, on the other hand, has recently published confessions it gathered from the captured Turkish officers. Their confessions concluded that they were trained by 'Israel's' Mossad, and were instructed to carry out bombing campaigns to destabilize the country from within. The captured Turkish officers said that the "Mossad also actively engaged in training soldiers from the Free Syria Army, and that Mossad agents came to Jordan in order to train al-Qaida officials to send to Syria to carry out attacks".

Meanwhile, Jordan's Al-Helal News website reported that units from the Royal Desert Forces operating in the north western desert area managed to arrest a number of non-Jordanians who were trying to enter Syria illegally, finding automatic firearms in their possession.

Assistant Director of Jordanian General Security and Commander of the Royal Desert Forces, Lt. Gen. Mohammad Khalaf al-Sayyed, said that seven men carrying AK-47 rifles were arrested. All of them are not from Jordan, and those people were arrested by the authorities while they were trying to enter a neighbouring country illegally, the official said.

Armed insurgents belonging to radical Islamist groups are crossing the border from Turkey, Lebanon and Jordan, some Libyans fighters have been captured.  Last week's double attack on Aleppo was blamed on al Qaida whose objective is to destabilize the Syrian State. Anti-government violence followed, local residents trapped between warring sides, civilian casualties mount.

Radical Islamic groups, who are working on inflicting heavy casualties and many deaths among security forces and civilians, are intensifying their efforts to provide Turkey, NATO, 'Israel' and partners with a justification for humanitarian intervention; under the principle "Responsibility to Protect", they believe that would provide the western alliance with an opportunity to use the UN-GA latest statement on Syria and interpret it in a way to serves their objective of attacking Syria. (UN-GA latest statement on Syria ignores the fact that International law prohibits interfering in the internal affairs of other nations, including determining the legitimacy of their leaders)

The war planners have to go back to their own drawing board, and to add to their military assessment that they are not dealing with a weak or an isolated country. Syria has demonstrated its strength in countering, containing and defeating large parts of the Radical Islamic groups. Syria showed the western alliance that it was in a strategic alliance with powerful global partners who were prepared to get involved in defending it. Syria's partners perceive destabilizing Syria as a direct threat to their own national security.

His book The Arabian States of the Gulf and International Oil Monopolies, Published in Arabic language 1987 and banned by most of the Arab Regimes; considered as a gospel to most revolutionaries and resisting movements in the Arab world. He is the founder of the alternative news network http://saebpress.com.