During the first two days of February four terrorist attacks were committed in Colombia, killing 20 people and injuring over 100. The first two bombs planted in vehicles exploded near a police station in the city of Tumaco Villa Rica, then grenades were thrown at a military unit, and the last bomb exploded near a hotel. 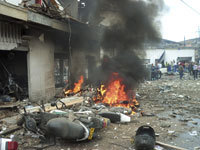 The government immediately blamed leftist rebels of the Revolutionary Armed Forces of Colombia (FARC - Fuerzas Armadas Revolucionarias de Colombia). They control nearly 20 percent of the territory, mostly remote areas of the center and south, adjacent to the Andes and extending to the Pacific.

According to the authorities, the FARC group has fully recovered after being nearly decapitated. Over the last three years its leaders Raul Reyes, Alfonso Cano, Ivan Rios, and the founder and leader of the group 78-year-old Manuel Marulanda fell either as a result of bombings or at the hands of assassins.

This opinion is shared by the government and Colombian intelligence. The researcher Corporación Nuevo Arco Iris and an expert on guerrilla movement Ariel Avila believe that with these actions FARC indicates that they recovered after the murder of its leader Alfonso Cano last November. However, according to Defense Minister Juan Carlos Pinzón, the actions of the guerrillas displayed new elements. They entered into an alliance with the mafia, in particular, with the largest gang in the region Los Rastrojos.

However, this theory is supported by neither professionals nor the public. "There is no alliance (between the FARC and Los Rastrojos - Ed.)," said Avila. "There are different theories. First that is the work of FARC, the second is that it is the struggle for the division of property between the drug gangs. It is not clear. What is clear is that the Los Rastrojos are not interested in the aggravation of relations with the government," Colombian paper ElPais quoted Avila.

The local residents of the stricken city of Tumaco (a port located on the border with Ecuador and a major drug transshipment point) argue that the FARC group has nothing to do with the explosions. "Everyone knows who'd done it, but prefers to remain silent," the Colombian newspaper Semana wrote. "Very few people speak here of FARC, everyone is talking about the Los Rastrojos. Mostly people keep quiet, they do not trust the authorities, the police are corrupt and the criminals can kill over any word. We are all hostages," said one resident.

The official site of FARC does not confirm its involvement in the past terrorist attacks either. Indeed, it is difficult to assume that after the new management of the group represented by Timoleon Jimenez has declared its readiness to start a political settlement, and in the midst of difficult negotiations for the release from captivity of six (other sources say ten) Colombian army soldiers, the guerillas would commit such ill-considered actions.

This exacerbation is not advantageous for the president Juan Manuel Santos, who succeeded the U.S. ally Alvaro Uribe in this position. Santos made a bid to normalize relations with the FARC and Venezuela that Uribe has accused of aiding guerrillas. It was Santos who has diminished the U.S. influence in the country, in particular of the Office of the U.S. Drug Enforcement (DEA), betting on its own strength, and began the process of political settlement that was reduced to nothing within 48 hours in the first days of February.

The president called the leaders of the FARC hypocrites and said that the attacks were "cowardly and mindless, and they make a peaceful settlement impossible." But even his words show visible inconsistencies in the official story: "At first they announce the release of (the hostages), and then attack us." Indeed, it is illogical. Neither the drug lords, nor guerrillas, nor the government needed the aggravation of the situation. Then who needed it?

Perhaps, the local drug lobby and the U.S. State Department, that has long been using the war against drug for political purposes. It is no accident that Bolivian President Evo Morales said that after the expulsion of DEA from the country, many drug gangs were destroyed or their activity was significantly reduced. Similar statements were made by Hugo Chavez supporting FARC as a Bolivarian peasant movement that was originally directed against land seizure by latifundistas, and in the early 1990s against American corporations that received licenses from the State to develop the country's resources.

"The intervention of these services is seen as a negative factor in all of Latin America. There is no doubt that the DEA establishes a link between low-level drug production and drug trafficking and receives information about all the illegal groups that supply weapons and information to terrorist groups through underground channels," said the analyst. According to the Colombian political scientist and analyst Ramon Gimeno, the United States for decades used their offices to combat drug trafficking for monitoring and exploration in Latin American countries. "The CIA, DEA and other U.S. intelligence agencies created to combat terrorism have been working in Colombia since long time ago. They started in the 1960s-1970s, and were engaged in secret political issues as well as public issues, such as guerrillas, strongly linking the latter with distributors of drugs," he said.

With this information and a half-century history of persecution, FARC, listed by the U.S. as a terrorist organization, should have been eliminated long time ago, but the reality is far from the declarations of the U.S. government. It is obvious that the explosions could easily be arranged by the intelligence agencies to restore their influence in Colombia and rule out peaceful settlement of the conflict, which, as in Afghanistan, helps to increase the production of cocaine and its traffic to the United States.

As for such methods of struggle like kidnapping and involvement in drug trafficking, they strongly undermine the credibility of the FARC in the world community. But as the Colombians say, the entire country is "on the needle." Drugs feed the peasants who grow coca, the manufactures who produce cocaine, the bandits who move it, the guerrillas who take it away and resell it, Self-Defense Forces (Paramilitares) that guard drug lords and the elite of the American business, and the police who would protect everyone who pay. The list can go on throughout the entire vertical of power.

When one gets to President Santos, one can second-guess the reasons for his proposals in November of last year to legalize the drug trade at the international level. According to Santos, it would reduce the level of violence and crime. And maybe, would legalize incomes, including his own?