Islamists to take power in their hands in Kuwait

The Emir of Kuwait Sabah Al-Ahmad Al-Jaber Al-Sabah tasked the newly appointed Prime Minister Sheikh Jabir al-Mubarak Al-Sabah to form a new cabinet. All top positions in the country are occupied by members of the ruling al-Sabah dynasty. The latter headed the Government in November of 2011, after the Kuwaiti monarch in the wake of the government crisis was forced to move the former chairman of the government and announce early parliamentary elections held on February 2. Representatives of the radical Islamist (including Salafi) groups won a landslide victory and received 34 mandates out of 50 available. 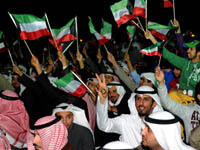 Meanwhile, as shown by the results of the elections, the democratic opposition that received only four of the mandates is noticeably inferior to the popularity of the Islamists. The latter nearly doubled their results compared with the elections in 2009. Interestingly, although women in Kuwait are entitled to vote, none of the 23 female candidates passed to the parliament.

Why did protests intensify in one of the richest countries? As stated in an interview with "Pravda.Ru" by Vladimir Isaev, an Arabist: "The vote in Kuwait reflects general trends in the Arab world. The Islamists win in every country that had democratic reforms. For example, this is true for Tunisia, Morocco and Egypt where Islamist parties won a majority in local parliaments.

The reason is the disappointment in the previous regimes that became insolvent in the public eye. Now the people are increasingly trying to find a way out, referring to the "pure Islamic past prosperity of the society" during the reign of the four righteous caliphs.

As for Kuwait, from the standpoint of democracy, it is the most advanced of the Arab Gulf countries. Kuwait was the first of them to found a parliament, albeit quite limited in its rights, as the last word rests with the monarch. The Emir believes that it is better to speak to the people in the Parliament than force them go into the streets.

As to the reasons of the Islamists' successes, the increasing number of people is dissatisfied with that little of what the authorities are doing to further the growth of the welfare of the people. There are other moments like "the dominance of migrant workers." However, in Kuwait the situation is somewhat similar to the Russian reality, where most people are simply not ready to work at well-defined positions.

Finally, there is also the discontent of the young people who, despite their education, are not capable of securing a managerial job because of limited staff. These "losers" get very good welfare and often scold power.

At any rate, so far the Emir does not have serious grounds for concern. Much of the population are still inclined to see the monarch as a viceroy of God, and are not ready for radical change, as it was in countries with secular regimes in which the interim Prime Minister and President have been deprived of the legitimacy enjoyed by the members of the ruling dynasties.

The present monarch of Kuwait, instructing Sheikh Jabir al-Mubarak Al-Sabah to form a new government, is ready to repeat the dispersal of the Parliament, as he had done more than once. Moreover, the Emir retains control over key appointments in the leadership of the country."

However, this time the protests in the Kuwaiti society were at their peak, and the alignment of the Parliament, in which the radical Islamic opposition has an absolute majority, clearly confirms this. The events in Kuwait cannot but worry the United States that traditionally considered the country a springboard for a possible attack on neighboring countries such as Iran. Incidentally, an additional increase of the U.S. troops in the country made possible because of the troops withdrawn from Iraq has also played an important role in the rise of protests among Kuwaitis, indignant against the fact that "the Emir became a puppet in the hands of America hostile towards Islam."

One cannot fail to take into account the fact that Shiites are extremely dissatisfied with the current regime as well. They amount to nearly one third of the three million people whose rights are still inferior to those of the Sunni majority. Yet, the greatest frustration is experienced by 200,000 Bedouin, generally devoid of any kind of rights. According to human rights activists, the total number of non-citizens in Kuwait who do not have access to an equal distribution of wealth is approximately 55 percent.

The explosive potential of the country is high. It is difficult for Emir to reduce the growing tension. During the global financial crisis in terms of the growth of revenues Kuwait began to markedly lag behind its neighbors. The growth of its economy last year grew by 2.6 percent compared to 4.2 per cent in the UAE, 5.7 in Bahrain and 18 in Qatar. Per capita income for the last three years was lower than during the pre-crisis period. In this situation there will not be enough funds even to meet the needs of full-fledged citizens.

But as in the case of Bahrain, Saudi Arabia will help Emir to mitigate the protests. However, it has enough of its own problems (millions of migrant workers, turbulent situation in neighboring Yemen, the presence of an impressive oppressed Shiite community) that will inevitably worsen. If public protests in the Gulf get synchronized in time, monarchical regimes are at risk of losing control over the situation.