Syria has always been western target 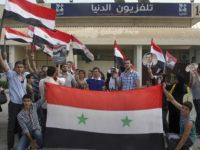 Looking back at: "frighteningly frank" plans.

"'The very concept of objective truth is fading out of the world. Lies will pass into history." --George Orwell (Eric Arthur Blair, 1903-1950.)

For anyone in two minds about what is really going on in Syria, and whether President Assad, hailed a decade ago as "A Modern Day Attaturk," has become the latest megalomaniacal despot, to whose people a US-led posse of nations, must deliver "freedom," with weapons of mass home, people, nation and livlihood destruction, here is a salutary tale from modern history.

Have the more recent sabre rattlings against Syria* been based on US-UK government papers, only discovered in 2003 - and since air brushed (or erroneously omitted) from even BBC timelines, on that country?(i)

In late 2003, the year of the Iraq invasion, Matthew Jones, a Reader in International History, at London's Royal Holloway College, discovered "frighteningly frank" documents: 1957 plans between then UK Prime Minister, Harold Macmillan, and then President, Dwight Eisenhower, endorsing: "a CIA-MI6 plan to stage fake border incidents as an excuse for an invasion of Syria by Syria's pro-western neighbours." (ii)

At the heart of the plan was the assassination of the perceived power behind then President Shukri al-Quwatli. Those targeted were: Abd al-Hamid Sarraj, Head of Military Intelligence; Afif al-Bizri, Chief of Syrian General Staff: and Khalid Bakdash, who headed the Syrian Communist Party.

The document was drawn up in Washington in the September of 1957:

"In order to facilitate the action of liberative (sic) forces, reduce the capabilities of the regime to organize and direct its military actions ... to bring about the desired results in the shortest possible time, a special effort should be made to eliminate certain key individuals.

"Their removal should be accomplished early in the course of the uprising and intervention, and in the light of circumstances existing at the time."

In the light of President Assad's current allegations of foreign forces and interventions, cross border incursions (as Colonel Quadddafi's before him, so sneered at by Western governments and media - and and, of course, ultimately proved so resoundingly correct.) there are some fascinating, salutary phrases:

"Once a political decision has been reached to proceed with internal disturbances in Syria, CIA is prepared, and SIS (MI6) will attempt to mount minor sabotage and coup de main (sic) incidents within Syria, working through contacts with individuals.

"Incidents should not be concentrated in Damascus ... care should be taken to avoid causing key leaders of the Syrian regime to take additional personal protection measures."

Further : a "necessary degree of fear .. frontier incidents and (staged) border clashes," would "provide a pretext for intervention," by Iraq and Jordan - then still under British mandate.

Syria was to be: "made to appear as sponsor of plots, sabotage and violence directed against neighbouring governments ... the CIA and SIS should use ... capabilitites in both psychological and action fields to augment tension."

Incursions into Iraq, Jordan and Lebanon, would involve: "sabotage, national conspiracies and various strong arms activities," were, advised the document, to be blamed on Damascus.

In late December 2011, an opposition "Syria National Council" was announced, to "liberate the country." Representatives met with Hilary Clinton. There now seems to be a US - endorsed "Syrian Revolutionary Council."

The Eisenhower-Macmillan plan was for the funding of the: "Free Syria Committee" and "arming of political factions with paramilitary or other actionist capabilities" within Syria.

CIA-MI6, planned fomenting internal uprisings and replacing the Ba'ath-Communist-leaning government, with a Western, user-friendly one. Expecting this to be met by public hostility, they planned to: "probably need to rely first on repressive measures and arbitrary exercise of power."

The document was signed off in both London and Washington. It was, wrote Macmillan in his diary: "a most formidable report." A report which was: "withheld even from British Chiefs of Staff ..."

Washington and Whitehall had become concerned at Syria's increasingly pro-Soviet, rather than pro-Western sympathies - and the Ba'ath (Pan Arab) and Communist party alliance, also largely allied within the Syrian army.

However, even political concerns were trumped by Syria then controlling a main pipeline from the Western bonanza of Iraq's oil fields, in those pre-Saddam Hussein days.

Briefly put: in 1957, Syria allied with Moscow (which included an agreement for military and economic aid) and also recognized China - then as now, the then Soviet Union warned the West against intervening in Syria.

Syria is unchanged as an independent minded country, and the loyalties remain. It broadly remains the cradle of the Pan Arab ideal of Ba'athism, standing alone, since the fall of Saddam Hussein's regime.

In 1957, this independent mindedness caused Loy Henderson, a Senior State Department official, to say that:"the present regime in Syria had to go ..."

Ultimately, the plan was not used since, British mandate or not, neighbouring countries refused to play. However, the project, overtly, bears striking similarity to the reality of events over the last decade, in Syria - and the region.

In a near 1957 re-run, Britain's Foreign Minister, William Hague, has said President Assad "will feel emboldened" by the UN Russia-China vote in Syria's favour.

Hilary ("We came, we saw, he died") Clinton, has called for "friends of a democratic Syria" to unite and rally against the Assad government:

"We need to work together to send them a clear message: you cannot hold back the future at the point of a gun," said the woman filmed purportedly watching the extrajudicial, illegal assassination of maybe, or maybe not, Osma Bin Laden and others - but certainly people were murdered - by US illegal invaders - at the point of lots of guns.

Supremely ironically, she was speaking in Munich (5th February) historically: "The birth place of the Nazi party."

The Russia-China veto at the UN on actions against Syria has been condemned by the US varyingly as: "disgusting, shameful, deplorable, a travesty."

Eye opening is the list of US vetoes to be found at (iii). Jaw dropping double standards can only be wondered at (again).

Perhaps the bottom line is: in 1957, Iraq's oil was at the top of the agenda, of which Syria held an important key. Today, it is Iran's - and as Michel Chossudovsky notes so succinctly: "The road to Tehran is through Damascus."(iv)

(All emphasis, the writer's.)