Remember Libya anyone? You know, when NATO promised Russia and China they would fill in the details later and that there would be only a no-fly zone to protect civilians? Well, February 4 is X-Day declared by the NATO-backed Syrian Opposition, the culmination of terrorist atrocities to create a false flag event sending NATO in and starting WW3. 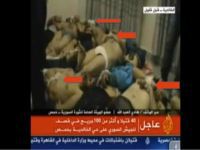 Remember when NATO aka the FUKUS-Axis (France, UK, US and Israel) drew up Resolutions 1970 and 1973 imposing a no-fly zone in Libya, based upon "horrific massacres" by the Libyan Armed Forces and "Government aircraft strafing towns and cities"? Remember what happened when the Libyan authorities gave the foreign news agencies a free hand and told them to take them to the places where they had hours earlier affirmed there had been such attacks? Remember that the FUKUS-Axis failed to fill in the details to the Russians and Chinese, remember the mission creep as a no-fly zone turned into a full-scale invasion by NATO special forces, into the full-scale support given to the Libyan terrorists who cut the throats of black people in the streets, who raped women, who impaled children with metal spikes, who torched people and buildings and committed theft, robbery, murder, torture and acts of terrorism? Remember which governments backed this scourge?

Well ladies and gentlemen the circus is back in town, this time in Syria. The same FUKUS-Axis is arming and training groups of terrorists who have perpetrated massacres in Syria and when the Syrian government forces fight back, they are derided under hails of criticism from Hillary Clinton, William Hague, Alain Juppé and a very willing western media, accused of massacres, accused of using unreasonable force, accused of imposing a crackdown on the people.

The Syrian Opposition is not the people of Syria. Despite what the Opposition is saying, the Syrian Government is largely popular and despite what the Opposition is saying, this so-called Syrian National Council is a mirror of the Transitional National Council in Libya - rapists, racists, torturers, arsonists, thieves and murderers. And what is the Syrian National Council? It is a Turkish-based group called Suriye Ulusal Geçiş Konseyi. Reading the geopolitical map, a throwback to Ottoman times when the Ottoman Empire ruled the entire area? Hailing the rise of Turkey and Qatar as pro-western Central Asian and Middle Eastern power brokers?

In part, and also another FUKUS-Axis toy to gain dominance for the FUKUS-Axis in the region and to use as a stepping stone in the forthcoming war against the Islamic Republic of Iran, first and later, Russia and China.

Has anyone noticed the huge coincidence between the protests outside Syrian Embassies by Syrian misfits and exiles and the so-called "Massacre of Homs" today? Western news agencies are obediently following the line "We have no evidence but we have no reason to disbelieve" the stories being sold by the FUKUS-backed Opposition. In fact, it would be more poignant to say that the Opposition and the FUKUS-Axis are one and the same thing, using FUKUS-Axis military equipment to wreak havoc. It is called terrorism and as in Afghanistan, as in Kosovo, as in Iraq, as in Libya, the FUKUS-Axis has no qualms whatsoever about cavorting with terrorists if these will open the doors to its imperialistic ambitions.

And the "massacre" which is supposedly taking place right now in Homs just ahead of the UN Security Council vote on the matter takes place a week after Pravda.Ru exposed the ploy to stage an attack with chemical weapons smuggled by the Enemies of Syria to the Turkish border - in the event, now outed, the attack never took place.

The "massacre" in question, which is supposed to bear a direct influence on the UN vote, is being carried out by whom? Has anyone any evidence that the security forces are massacring innocent civilians? What are you supposed to do when armed gangs of terrorists lay siege to a neighbourhood? The Syrians have been fighting these mercenaries and terrorists for nearly a year now. Or was the "massacre" perpetrated by the Enemies of Syria, which then was attacked by the Government Forces in retaliation?

It is very well for western news agencies to carry stories of 105 or 217 people being killed, it is all very well for western-based human rights organizations to claim that atrocities are being perpetrated but after Libya, what credibility do BBC, SKY, Al Arabiya, Al Jazeera, AFP have? Just as in Libya, where the "Opposition" was comprised of terrorists, rapists, racists and murderers, as we have seen only too clearly, the Enemies of Syria are what?

Suppose someone told the truth about Homs? Was this a Government massacre, or was this a mail-order massacre carried out on the eve of the UNSC vote by the Enemies of Syria? Isn't this a little too obvious? If the UNSC was about to vote, then why would the Syrian Government give them a reason to apply tremendous pressure on Moscow and Beijing to at least abstain from and not veto a FUKUS-Axis intervention (which will happen anyway if any resolution on Syria involving any sort of action is passed; as we saw in Libya, the paper they sign is worthless)?

Pravda.Ru sources on the ground in Homs have stated that "This is a terrorism massacre. They went from house to house massacring people from the Allouite minority (to which President Bashar al-Assad belongs)". Look at the main photo. The arrows point to the fact that the hands of the bodies were bound. So if the Syrian Government forces are going to shell a community, they go in first, tie up their hands and then bomb them?

How stupid do you have to be to believe this? The fact of the matter is that these people were seized by the Istanbul pro-FUKUS-Axis terror squads operating inside Homs, were handcuffed, and executed, then when the authorities moved in, placed in the eye of the camera for all to see. In go the western bullshit agencies and we have another nice neat story concocted just in time for a UNSC vote. And Hillary Clinton, William Hague and Alain Juppé make their claims. At best they are totally incompetent. At worst, something far, far more sinister.

Do they think Russia and China are stupid, or what?

Parting thought: The writer, Najah Ibrahim, assured that this country has never known division, racism or sectarianism throughout its entire history, and called on intellectuals to confront the crisis inflicted on the country from abroad.

This is a document of kidnapped people in Homs today, February 4. They are ALL pro-Government sympathisers. Many will figure among the dead presented to the West today and to the UN tomorrow:

Interesting. The victims of the "Government shelling" were executed by shooting:http://www.youtube.com/watch?v=5ito83NnXKc&feature=share