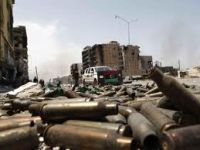 Libya has almost left the news since the Hollywood production featuring the alleged death-murder of Muammar Gaddafi. His son, Islam al Gaddafi was arrested. At the first, it was reported that he was injured and even with risk of gangrene.

The above, who was to be the political heir of his father, disappeared. Our agencies reported that pro-Gaddafi forces recovered the town of Bani Walid, one of the strongholds of Gaddafi to fall under control of the National Transitional Council. After that came a report that the NTC regained the stronghold, but the news, like most in the compromised western corporate media, has no credibility.

We are reminded that not one single claim of victory in battle by NTC has ever been true, but complete fabrication.

The Arabic daily Asharq Alawsat reported the information that U.S. troops arrived in Brega, under the supposed pretext of creating "stability" and "security." The agency Press TV reports that in reality, these U.S. troops are involved in taking control of major oil wells and strategic ports involved in the shipment of oil.

It is worth noting that Brega, the important port city, is located in eastern Libya, and has one of the five oil terminals in the region, besides being a major refinery.

Speculation or not, all the news in question did not come out in the media market. There were no more than two or three lines about the new fighting in the North African country, but without any details or insights.

The certain fact is that charges by many human rights organizations under which war crimes and violations against Libyan civilians by the North Atlantic Treaty Organization (NATO) were committed, up until now have not been investigated.

Not only that, but the NTC appointed Abdel-Rahim al-Kib as prime minister in Libya. This suspicious individual taught at American universities and headed the Institute of Petroleum of the United Arab Emirates before joining the NTC in mid-2011. And besides, some of his research in electrical engineering was funded by the U.S. Department of Energy.

The backlash in Libya is striking. It seems the western powers are only confirming what was predicted soon after the taking of Tripoli, by independent analysts, that is, the country that once enjoyed the highest Human Development Index (HDI) in Africa was undergoing a new process of colonization in the style of the early nineteenth and twentieth centuries.

Also, there is an aggravating factor, namely the return of Sharia, which affects the movement of kids and women. During the Gaddafi era, women occupied relevant positions in the country. The new government, based on Sharia, has determined that women who want to move to regions distant from their place of residence need permission from their father, husband or brother.

As for the media market in Libya, it is a case shut tight in favor of the so-called "democratic forces," in other words the terrorists who are ravaging the country. It matters little now what is happening in the country.

And perhaps if something fails, and just about everything is in a state of total failure, the imperial power will decide to send military reinforcements to ensure "stability." Libyans continue to suffer with no clean water, no electricity and food and gas shortages. No one is safe at any time. Slavery is freedom.