Iran and their Rights 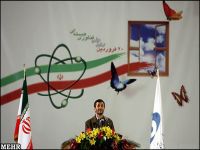 ... "Iran is enriching uranium, it will continue to enrich uranium and has every right to do so in accordance with international law." [1]

With the words of these authors, Flynt Leverett and Hillary Mann Leverett, it is stressed that the nuclear issue of Iran will never be resolved if Israel, the United States and their European partners do not understand the above stated clearly and unambiguously. To illuminate this point from different perspectives, the authors pointed to arguments of some analysts who also came to similar conclusions. These considerations are intertwined, say Flynt Leverett, Hillary Mann Leverett and Peter Jenkins that we present below.

They point to the fact that the Non-Proliferation Treaty prohibits the manufacture or acquisition of nuclear weapons, but it allows the enrichment of uranium for civilian purposes. This enrichment is at the core of the dispute in the West against Iran ". [1] - [2]

As clearly stated above, the enrichment of uranium for civilian purposes is a right that is provided to Iran by the prerogatives of the Nuclear Non-Proliferation Treaty. Evidence of military activity by Iran has never been presented by Western representatives

They note then that a military strike against Iran, under these circumstances, could only logically be based on the peaceful activities of uranium enrichment by Iran. This enrichment as the treaty states, assures Iran's rights as a subscriber to the nuclear non-proliferation agreement.

Evidence to the contrary has never been presented, despite all efforts. This has always been correctly and accurately argued by Flynt Leverett, Hillary Mann Leveret said Peter Jenkins ..

What we see is that the perspective adopted by western countries involved in the dispute with Iran is aimed at the preservation of Israel's nuclear monopoly in the Middle East. [1] - [2]

It was also argued that recent measures taken by Tehran to change its modern and sophisticated centrifuges for the Fordo site in Qom, as well as to announce the opening of a new nuclear site, followed by their statement in regard to their production of fuel and combustion plates for the Tehran Research Reactor (TRR in acronym) had been taken with the intention of creating a situation of "political equality" in nuclear negotiations with the West. [1] - [2]

It was then said to be exactly equal politics, or something similar to it, that London, Paris and Washington do not want Iran to get. That is in order to secure the advantage for the West. [1] and [2].

It was also argued that even if Washington would look ​​for ways to modify its rigid stance on Iran, one could still observe the following:

a) - that both London and Paris are chronically concerned about the development of a nuclear capability (same threshold) of the important powers in the region (such as Iran) in relation to the relatively small nuclear arsenals of Britain and France. [1] [2]

b) - and what a continuous rise of Iran would represent in relation to the possibilities of the West continuing to dominate the Middle East, as it had been doing until now. [1] [2]

One cannot help but ask what can really be expected from the discussions with the so-called P5 +1, despite many good intentions that Iran and possibly Russia and China might have about reaching a fair and equitable agreement on the issue.

P5 +1 refers to the group discussions about the "nuclear standoff" - the United States, England, France, Germany, Russia and China. The part of the name +1 relates to Germany.

Personally I cannot get rid of the desire to emphasize that it is Germany that offered nuclear submarines to Israel. These submarines Israel used, not many months ago, demonstratively in the waters of the Middle East and well in the vicinity of Iran. These nuclear submarines can be comfortably loaded with nuclear weapons, according to what was reported.

Turning the analysis presented here: The intentions supposedly were to contain the dangers associated with nuclear proliferation. If these intentions were really sincere, the appropriate remedy would be to try to establish a Non-Nuclear Zone for the entire region. [1] [2]

It may be added that making Iran a helpless target does not in any way contribute to global security, quite the contrary. The preservation of Israel's nuclear monopoly in the region does not allow anybody to sleep quietly.

As I am no part of the group of people who have knowledge (de-facto) of the situation, I have to settle for having to say that for my part, I have never seen this monopoly confirmed or denied. So from my perspective, the remedy is to demand that Israel's cards be put on the table. And that's just to begin the negotiations.

Peter Jenkins, [2] as an analyst and expert on the intimate nature of the cause in question, emphasizes the simultaneous increase in two risks in the current situation.

All requirements are a result of the disproportionate western demands that Iran give up its rights established by international law-that as a participant in the Nuclear Non-Proliferation Treaty that permits Iran to enrich uranium for civilian use.

Of the "new suspicions" of the IAEA, one can safely say that they are not "new" and they do not have anything at all. Such suspicions were discarded years ago in regard to not complying with the requirements of relevance and specificity.

A new report by the IAEA, recently welcomed by the West, resurrected some dubious data which was never accepted by the former director of the IAEA, Mohamed El-Baradei, for being just that, dubious. This data was dismissed by El-Baradei for not having inherent credibility. The new director welcomed it and dressed it in new clothes.

More specifically what was said by the new representative is that the idea that such activities had not continued could not be dismissed. Well, ideas based on dubious data, smelling of dubious foundation that have never been proven and accepted are now "new directions" causing "new outrage" followed by a crescendo of economic sanctions against Iran by the leadership of western states (read as the U.S., France, England) leading us to where we are today.

We have no concrete evidence, it is not a shadow. However, the sharp pointed guns are ready to be put into action. Again-in the Middle East. God forbid.

[1], Flynt Leverett and Hillary Mann Leverett in "westerners AND HIGHLY Informed Iranians KNOW THE WAY OUT OF THE NUCLEAR IMPASSE ... BUT THE OBAMA ADMINISTRATION WILL NOT TAKE IT." - The RACE is on for IRAN www.raceforiran.com on January 28, 2012

[2] Peter Jenkins, Britain's former representative to the IAEA-International Atomic Energy Agency - in "The West Could Strike a Deal With Iran" published in The Telegraph. Source: www.raceforiran.com - The Race for Iran. on January 28, 2012