Who ordered another problem in Tibet? 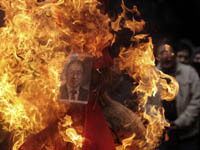 The beginning of 2012 was marked with aggravation in Tibet. Free Tibet human rights organization reported that during the police crackdown on demonstrations of ethnic Tibetans, two protesters died from gunshot wounds on January 24. According to Chinese news agency "Xinhua", they were terrorists who on January 24 have attacked a police station in Seda Ganzi county of Tibet Autonomous Region.

They pelted it with stones and bottles filled with gasoline, which resulted in 14 injured policemen. The authorities claim that during the restoration of the order only one demonstrator was killed. Another one was injured and 13 arrested. Human rights activists believe that the police provoked the demonstrators by violently dispersing their rally the day before, resulting in 30 injured Tibetans.

They cite the words of a Tibetan monk who claims that on January 23 police opened fire on protesters in the monastery district Luhuo. Also, he said that the demonstrators were in favor of Tibetan independence, the return to China of their spiritual leader the Dalai Lama, and cessation of conscious migration of the Chinese to the Himalayas. The latter is done in all problem areas of the country to create a preponderance of loyal citizens over potentially dangerous ones.

Meanwhile, a similar clash occurred recently in other part of China. Dozens of people, including monks, staged a pogrom, attacking shops and a police station. Then, five law enforcement officers were injured.

Active rallies demanding independence of Tibet took place in 2008. In fact, what happened then was a rebellion that had to be suppressed by the military. Then, at least 18 people were killed. The protests were quickly suppressed, and over one hundred of arrested Tibetan monks were sent for "patriotic re-education." However, since then, according to Tibetan organizations, the situation in many areas remained tense.

Of course, the actions of insurgents were supported in the West. The Dalai Lama was the guest of honor in the United States. Soon after he received the Nobel Peace Prize, which was a direct challenge to China.

Since the beginning of 2011 a trend for further aggravation of the Tibetan issue was observed. Self-immolation of Tibetan monks protesting against the "occupation of Tibet" and the Chinese government occur frequently. 14 such incidents have been recorded in China since March of 2011.

Most of them occurred in the prefecture of Aba and Kirti Monastery located in Sichuan province, which has become, according to human rights advocates, a place of concentrated anger of ethnic Tibetans because of undermining of the foundations of their culture.

Stephanie Brigden, director of the British organization Free Tibet, said that these recent acts of self-immolation confirm that what we are currently facing in Tibet is a long and principled opposition to the Chinese occupation.

She also complained about the world community ignoring the Tibetan issue. The fact that 14 people in various parts of Tibet have decided to set themselves on fire is a harsh indictment of the international community that was unable to respond. As long as world leaders are trying to ignore the emergency in Tibet, one can only expect that such acts of protest will continue, she said.

Tibetan human rights activists point out that insertion of the Chinese Red Army in Tibet in 1950 did not mean that the Tibetans have surrendered. They recall that a representative of the Dalai Lama signed an agreement with China in 1951 on conditions of granting autonomy to Tibet, which allegedly does not actually exist.

Now various Tibetan and other organizations try to draw the attention of the West to the issue that the Chinese authorities prefer to ignore. They deny all accusations of repressions and suppression of culture, pointing out that the official Beijing has greatly improved the standard of living of the population of Tibet, abolished slavery and other vestiges of "old age", and has invested huge funds for the development of the region.

In contrast, the Chinese government accused the Dalai Lama, the Tibetan spiritual leader in exile, of pushing people towards suicide with the support of the West.

The Dalai Lama denies this accusation and calls on the Chinese authorities to respect the autonomy of Tibet, where the indigenous people can hold their religious rites, and to stop migration of the Chinese into the area.

However, the accusations of Tibetan human rights activists addressed to the West look rather odd. After all, who but the United States, Britain and other countries of the Western civilization support their organizations, including the most radical ones? The Chinese intelligence services have long established a link between those who struggle in Tibet and the representatives of the CIA and MI6.

For the West, the national issue is one of key moments in the growing strategy of containment of China. Tibet and Xinjiang are the main areas that foreign intelligence services are trying to use in this regard.

However, as practice shows, all attempts to pressure China are ineffective. The country has growing, self-sufficient economy, and its armed forces are strengthening as well. It has its own national policy in the outskirts, designed for many centuries, and does not intend to repeat the mistakes of the late Soviet Union.