The foreign ministers of the Arab League agreed on Sunday to call for Syrian President, Bashar al-Assad, to transfer his powers to the Vice President of the country, and form a national unity government and within two months to hold elections. 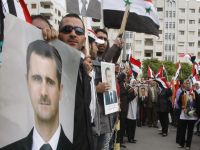 Hisham Wannous, Telesur correspondent in the Middle East, reported that at the end of the Arab League meeting they held a press conference summarizing the conclusions reached in the report of the Arab Observer Mission deployed in Syria.

After reviewing the final report of the mission of the Arab observers in Syria, pan-Arab foreign ministers signed a document that requires the executive branch to be headed by a person of "consensus" and says that the same should be required to apply to the road map drawn by Arab countries.

Wannous reported that "the unity government proposed by the ministers includes all Syrian opposition segments either domestic or residing abroad."

In the joint statement, it calls on Al Asad hand over his powers to the vice president and "to cooperate with the unity government, so that they can carry out their work in the transition period."

The Arab League also called on the hypothetical future government to, within three months, create a commission to draft a new constitution to be approved by referendum.

According to the roadmap agreed by the League, a new electoral law will be developed within six months, after which presidential elections will be called, then the constitutional referendum and finally legislative elections.

The ministers affirmed through the report provided by the mission that it had noted "partial progress" in meeting "some commitments" by the Syrian government.

The secretary general of the Arab League and Qatar's Prime Minister called for a meeting with the President of the Security Council of the UN to ask for support for what they called the Arab initiative on Syria, reported the Middle East correspondent.

Wannous indicated also that "among other things, they spoke of sending Arab troops to Syria and most countries rejected this proposal."

Algeria's foreign minister rejected the tendency to go to the Security Council of the UN to help and give support to the Arab initiative, stressing that "this is an Arabic case to be solved among Arab countries," said the journalist.

So far there has been no official reaction from Syria with regard to these conclusions reached by the Arab League. However, "at the popular level there has been a rejection of this proposal, especially the transfer of power by President Bashar Al Assad to his vice president," he reported.

He also reported that "national opposition completely rejects the tendency to go to the Security Council of the UN or to internationalizing the case of Syria as opposed to the resident opposition and those living abroad represented by the so-called Syrian National Council formed in Istanbul."

"We wait for and expect an official response and it is most likely that the Syrian foreign minister will hold a news conference explaining the Syrian position regarding the requests of the Arab League," said the correspondent.