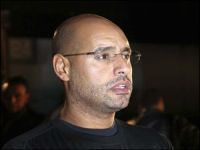 An important and expected event has occurred in Libya. Resistance leaders spoke about the creation of a temporary government in Libya. People all over the world, who comprise the world community, expected this moment. Now our task is to demand that our countries' governments withdraw recognition of the NTC occupational regime because they are not the legal representatives of the Libyan nation, and to begin diplomatic relations with the real Libyan government.

This government is being launched on a temporary basis until full Libyan liberation from the NATO invaders. This is because after that, People's Committees of different levels will be reinstated, and they will continue to govern Libya as it used to be prior to the invasion in February 2011. Certainly all encountered mistakes will be taken into serious consideration to prevent further causes for a new intervention.

Global media (Reuters in particular), through their agents (rats), try to spread lies through web resources, stating that the USA, France and Russian presidents are arranging a summit to discuss the situation in Libya, which they are concerned about, and to grant Saif Al-Islam to be Libya's Prime Minister with an essential continuing presence of Western companies in Libya.

It is clear that their goal is to create an informational mess and hide news about the Libyan Jamahirya Government launching; to offend Saif, Libyan Resistance and all Libyan people who will choose their leaders themselves as well. Barak Obama and Nicolas Sarkozy are criminals. The military forces of their countries are taking part in the robbery of Libya and the elimination of civilians, an ongoing crime for almost 11 months now.

Global propaganda continues to try to create an image of peacemakers as though they were ignoring their personal interests in destroying countries rich in mineral resources.

One additional purpose of this disinformation is to tru to minimize the Libyan struggle against the occupants. Global media attempts to conceal this struggle, but it has already spread all over Libya. In the East of Libya, the Obeydi Tribe, which at first participated in the war on occupants' side, liberated and held the rats-free City of Tobroock. The tribe supports the anti NTC, anti occupants revolt as well.

The Al Zintan tribe, since November 2011, that is to say since the Saif al Gaddafi arrival at the City of Zintan, fights in the Libyan Resistance ranks.  All this means is that the Libyan tribes are united in their struggle against the invaders.

The global media conceals information regarding successful Libyan Resistance operations. They depict it as terrorist attacks. For instance, they mentioned the French attaché with NTC whose assassination was committed by Libyan resistance patriots and the attack on French mercenaries such as the ex-French soldier killing. The whole operation was called a terrorist attack and it was pointed out that NTC has arrested a suspect.

Videos of tortures are spread through YouTube exactly as in the February-March videos of black skinned Libyans being lynched were posted. Website administrators delete only videos of NATO and Al-Quaeda crimes.

When the global media start to spread disinformation to make it seem the Resistance compromises, that should mean that each Libyan must continue to struggle, because when the leaders of the terrorist supporting countries are claiming through media that they want peace, it is clear that they want to have some rest and regroup their forces. It is essential to continue guerrilla war against the invaders with the same pace and exactly according to general strategy.

Now as the Libyan temporary government is created, it is essential for all good minded people and organizations to grant support to it and request from their countries' governments to recognize this government as the only legitimate representative of the Libyan people and the Libyan Jamahiriya.