Bashar Assad should be afraid of his own special services 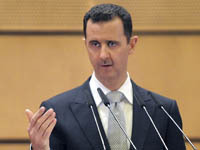 The opponents of the Assad regime are celebrating a great victory: for the first time in 10 months of conflict a military of a general's rank transitioned to their side. Mustafa Ahmad al-Sheikh is the most senior Syrian deserter who, according to Western media, commanded the largest army units. According to a number of Arabic sources, he is a "prominent member of military intelligence."

Although not all sources in Syria confirm the link between Mustafa Ahmad al-Sheikh and the Mukhabarat (military intelligence), the opponents of the Assad regime are now ready to bet on his overthrow through a palace coup. Given the role played by the security forces in Syria, the bet in this case will be made on their representatives.

The months-long efforts to ensure that Assad is overthrown by the Syrians have not yet yielded results. The direct aggression against Syria is currently complicated by a number of difficulties, and, apparently, the opponents of Damascus would dare to implement it only in exceptional circumstances. Meanwhile, the way out is seen either as a "classic" inside conspiracy or a significant weakening of the regime through bribing its prominent representatives.

The Syrian secret services have long tried and tested connections with their American and French colleagues (former chief of DGSE Jean-Claude Kusseran established good relations with the Mukhabarat in the 1980s, providing "technical assistance"), which makes the solution much easier for them.

On the backdrop of the current aggravation in Syria, few noticed an important date - 10 years of the US-Syrian cooperation of special services. After the attacks of September 11, 2001 the U.S. was in close secret contact with the regime of Assad meant to abandon the ties with Iran and radical groups, especially Palestinian and Lebanese "Hezbollah."

Syrian-American intelligence services became obvious in late September. Senior officers of the Anti-Terrorism Operations Department of the CIA arrived in Damascus to discuss with their Syrian counterparts issues of cooperation in the fight against "international terrorism" in the face of Islamic radical groups operating both in European countries (Belgium, Germany, France), and the Middle East (Lebanon, Pakistan and Afghanistan).

In Beirut, followed by talks held between the U.S. Ambassador Vincent Battle (according to Arab sources, he is also a high-ranking CIA officer) with the head of the Lebanese branch of the Syrian Mukhabarat Ghazi Kanaan. Albeit with reservations, but Bashar al-Assad agreed, hoping with the help of the West to deal with the Syrian Islamists who had fled to the West in the 1960s and 1980s, and improve its own image in the eyes of the European countries and the United States. That, in turn, should have had a positive impact on the economic reforms conceived by the young Syrian President.

The U.S. wanted to use Syria primarily to protect Israel and to eliminate the danger posed by the Lebanese "Hezbollah." In return the Americans promised Assad assistance in bringing peace to this country and the return of the Golan Heights. However, the role of Syria in the plans of the region was not limited to reformatting. The U.S. had special hopes for Assad in connection to the decision to remove Saddam Hussein.

In early 2002 thanks to the Syrian intelligence services their colleagues from the CIA prevented a major terrorist attack against U.S. military facilities in Saudi Arabia. In addition, the Mukhabarat helped the Americans to take Muhammad Haidar Zamara, allegedly involved in the preparation of the infamous attack of September 11. At the same time at the request of the U.S. Syrian authorities arrested a number of prominent Islamists who allegedly had links to Bin Laden's group.

It is no accident that late 2001-2002 was the "honeymoon" of the relations between Syria and the United States, including the political sphere. Washington has repeatedly stressed that he removed Damascus from the list of "America's enemies." During the visit of the U.S. Deputy Assistant Secretary for Middle East William Burns in Damascus, he conveyed a message from his U.S. counterpart Bush to President Assad in which he expressed his special thanks for their participation "in the fight against international terrorism, especially" Al-Qaeda.

Yet, the cooperation was not easy, and spring of 2002 brought disappointment to the parties. Indicative in this respect was the most important secret meeting that took place on May 20 in Houston, U.S. The meeting was attended, in addition to diplomats, by representatives of intelligence agencies and officials such as chairman of the Committee on Intelligence of the Senate Arlen Specter, who had managed to establish close ties with his counterparts from the Syrian Mukhabarat. At the meeting the White House pointed to the need for Syria to stop playing the role of a mediator between the Lebanese and Palestinian terrorists in Iran.

However, despite the generous promises, the Syrian President had refused to concede. Abandonment of relations with the Palestinian resistance and "Hezbollah" could lead to a loss of influence in Lebanon that has strategic importance for Syria, would have led to the collapse of the Syrian ambitions to be one of the leaders of the Arab world. Assad could not afford to become a traitor and a renegade to the Arabs.

Although the mission of American secret services, at first glance, ended in failure, in fact, they scored a success which was not evident to everyone. They have established real contact with their Syrian counterparts that may well be used against Assad today. According to the American sources, some members of the entourage of the Syrian leader and influential intelligence officers, including Ghazi Kanaan, Assad pointed to the need for a partial revision of the policy of Syria "at least in respect of "Hezbollah ".

Will the West fulfill its dreams? The United States already has similar experience with regard to Iraq and Libya. Although so far these attempts in Syria were unsuccessful, one cannot vouch for the fact that the security services, or at least some of them, will remain loyal to Assad to the end.

However, the work in Syria at times is more difficult. Syrian security system has an extremely complex structure and consists of a large number of cross-functional organizations monitoring each other. Moreover, within each intelligence service there are internal security departments.

Even the father of the current president Hafez Assad built the state security system in such a way that each of its organizations was subordinate to the President and members of his entourage. However, given the primacy of military intelligence Mukhabarat over the other intelligence, under a certain scenario the Americans could achieve certain results. The more so that the system security of Syria, mercilessly criticized by many Syrians for terror against innocent and inability, as shown by recent acts of terrorism, to defuse blame, has been deeply affected by corruption.