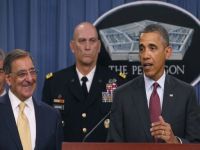 On 5 January, President Barack Obama was at the Pentagon, accompanied by Secretary of Defense, Leon Panetta. There, surrounded by the Joint Chiefs of Staff of the armed forces, he launched a new global military strategy for the United States.

A change in the structure of the armed forces was planned, a reduction of troops on the ground, and the maintenance and expansion of air and naval forces, as well as intelligence activities.

Obama told reporters who were present that the new strategy will focus on the Asia-Pacific, region, which is considered "critical," without neglecting the Middle East and the threat of Iran. "Our army will be reduced, but the world must know that America will maintain its military superiority. Our armed forces are agile, flexible and ready for a wide range of contingencies and threats," said the President.

The next day the main editorial in the New York Times referred to the topic, pointing out that the President adopted a new strategy, considering three realities: the long and highly costly wars in Afghanistan and Iraq with no categorical outcomes, the economic crisis and the high fiscal deficit and the "threats" of China and Iran.

But there was a fourth reason, writes the lead editor, that he did not refer to, which are the criticisms of Republican candidates for his military policy in an election year in which Obama's re-election is at stake. Therefore, he stressed that the U.S. will remain the dominant military power in the world and maintain its leadership in world affairs.

China's reaction was rapid. The Defense Minister, Geng Yansheng, claimed the United States was prudent in words and in actions. "We hope that the United States will act in accordance with the times and treat China and its army in an objective and rational manner, being careful with their words and actions and doing more for the development of relations between the two countries and their armies," Geng said in a statement.

A few days earlier on December 27, 2011, a Chinese expert, Lin Zhiyuan, and member of the Academy of Military Research of China, told the newspaper Liberation Army, that he denounced the intentions of the Yankee government: "Since the end of the war, the U.S. established as priorities its strategy to combat terrorism by deploying troops in Afghanistan and Iraq, making little progress in Asia. Today it is reversing this strategy which aims to preserve its leadership in the world. It is withdrawing troops from the battlefield and centralizing the focus in Asia, where it is taking substantial measures."

To one question by a journalist on the expressions of friendship during the 12th Round of Conversations between China and the USA on defence matters, the expert in military affairs answered: "The attitude of the USA towards China is ambiguous: while it participates in cooperation and prevention projects, at the same time it follows a policy of "balanced security" in the region, giving so-called "humanitarian aid" while it sells arms and goads its allies into following this line".

Lin was referring, no doubt, to continuing arms sales to Taiwan by the United States, although since the Nixon visit to China in 1972, it was recognized and acknowledged that the island is part of the Chinese state, as well as their continued support to Dalai Lama's claims of independence for Tibet.

For its part, Russia has a broader view of the current U.S. strategy. The purpose of this military strategy is to press the Euro-Asian alliance of Russia and China, the BRIC alliance, to counter on three fronts: in the west, NATO; the southwest and south; the Middle East, Afghanistan and the Southeast; and the strengthening of military bases in Japan, South Korea and Diego Garcia, as well as the Pacific Fleet, adding more aircraft carriers and nuclear submarines.

As an example, note the failure of negotiations with NATO on missile installation in Poland and Romania and the Kremlin's decision to respond by installing their own in Kaliningrad, East Prussia (Speech by President Medvedev on November 23, 2011).

Another example is the warmongering policy that follows the U.S. in the Middle East, using as a pretext the absence of political rights and the repression of the opposition in Syria and the Iranian nuclear program. In fact, this is aimed at three objectives: the defense of Israel, the protection of their oil companies, as well as puppet monarchs, and it serves to destabilize the Russian Federation in the Caucasus region, using Georgia as a spearhead.

Independent analysts go even further into its background. They say that the overall strategy is Anglo-American. For the British there are two priority areas: the Middle East and the South Atlantic. This region is also of interest to the U.S. due to the South American integration process that has two props--in the north, Venezuela, and in the south, Argentina. While the North American Southern Command is responsible for the first, a large military base in the Falkland Islands is necessary to press for the south, a task that would be provided by the UK who illegally occupies these above mentioned islands...

The new imperialist global strategy would be in a more complex era where Western economic and financial centers lose their hegemony, attempting to continue the "Churchill doctrine," from March 1946, exhibited in Fulton (USA), where he called for an "alliance of English-speaking peoples," to save Western civilization which he believed was threatened by the "red menace."

However, as we have seen, neither China nor Russia have been surprised by Obama's remarks at the Pentagon, surrounded by epaulets. Nor UNASUR since the Conference of Defense Ministers, held in Lima on May 13 last year, took the first steps to create a military structure that supports the integration process that imperialism, until recently dominant in our region, is trying to stop by different ways.