The drums of war! 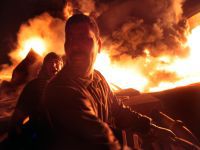 The drums of war have not ceased with the destruction of Libya. A new war-paint is being donned by the western imperial powers. The tune of martial music now has a Middle Eastern touch to it and the North African one has stopped for the moment.

Syria and Iran are the current focus points. As per the western media, thousands have perished in Syria, killed by Bashir Assad. All of the dead being civilians and rebels. But some reliable sources state that the rebels are not true rebels, but are planted and supported by subversive establishments of the West that have vested interests in this area. And once again, their Goebellian media is blowing up the matter, trying to divert people's minds from the realities that are haunting their societies, mainly economic woes.

Ban Ki Moon has once again donned the role of a conductor of an orchestra that now is playing martial music and which is sounding pleasant to the ears of the masters of the western industrial complexes. Zubin Mehta's talent seems like a layman's talent compared to the baton twirling acts of Ban Ki Moon!

The question at the moment of immediate concern is Syria. Of course, Russia and China have rightly vetoed the UN resolution calling for military intervention that the west had aimed at Syria. But overruling such International Laws has become child's play for the imperialist powers.

So will they again look beyond the veto and unleash their dogs of war on Syria? Will the NATO war machine, with the US drones, lead the way as was the case in Libya, and rule the Syrian skies by imposing their own no-fly zone, flouting the Russian-Chinese veto? Will the Russian fleet of warships that will be in that area retaliate if NATO starts to unfold its bag of tricks again to the rest of the world, by teaching a lesson in 'democracy' to Syria from 30,000 feet up?

A lesson in 'democracy' plus the responsibility to protect Syrian civilians from the marauding forces of Bashir Assad?!

At the ground level, the mercenaries seem to have been already planted, mercenaries from Qatar and the ex-colonial blocks as was in the case in Libya. It is now documented that at the time of the alleged brutal murders of Muammar Gaddafi and his son, American mercenaries alias commandos were on the scene either watching or directing the show.

If the Russians do not for the reason of avoiding escalation of the conflict, retaliate militarily, Syria will be a repeat of Libya. Heavy bombardment taking a huge toll on human lives and the infrastructure of the country, and ultimately adding another bloodied feather to the imperialists' cap. Another puppet 'democratic' government would take over the affairs of a once sovereign country.

Iran's theatre will be different from that of Syria. Iran, with an estimated number of launch-ready missiles being in the 1000's. An Armageddon is likely if Iran gets attacked selectively, as the west calls it. Whether the attack emanates from Israel or the US/UK, any attack will result in catastrophic damage to an area inhabited by millions. Both Iran and Israel will suffer heavily.

But the drums of war, knowing well the consequences of such an eventuality, have not ceased. The rhythm has only increased by the day

Recently the US told Israel that if Iran crosses the line drawn by them on behalf of the IAEA, the US alone can take action hitting Iranian targets. Crossing the line means that if Iran enriches its stockpile of uranium to reach military levels, that can, in turn, enable the country to arm its missiles with nuclear warheads.

At this juncture, it seems that whatever the inspectors of IAEA say shall be overruled by the US. It is like a repeat of the pre-invasion days of Iraq, when the inspectors from the UN had opined that Iraq was not in possession of any WMDs, nuclear or otherwise.

So if the US decides to go it alone with the UK tailing behind as usual like a faithful dog, will Iran strike first at US interests at the Straits of Hormuz or their naval headquarters based in Bahrain or launch some damaging missiles at Israel? These are possible scenarios if the situation escalates to the level of an armed conflict.

Russia and China have vast economic interests in Iran. The Russian government so far has defended the Iranian nuclear program stating it is civilian by nature and plans to build another nuclear reactor with its technology.

But the prospect of Iran going nuclear is giving the jitters to the Israelis, since Israel is the only nation in the entire Middle East that has a nuclear monopoly, both in military and civil areas. So no competition is allowed and Uncle Sam has nodded his head in agreement!

Just in case both Syria and Iran are successfully subdued militarily by the imperial powers, while the rest of the world looks on, it is going to be fait-accompli in that area. What or who is next will be the question that will automatically arise.

Probably the US will look South at the 'troublesome' countries of Venezuela, Bolivia and once again, Nicaragua. Colonel Oliver North will get thrills again if that happens! Brazil will have to be tackled too, but in a different way since its size will defy any military adventurism. It is a country now headed by a woman president, Dilma Rousseff, who at one time was a Marxist guerrilla fighting a military dictatorship that once ruled Brazil. The US may plan another military coup to oust this successor to Lula.

They succeeded in Chile on September 11, 1973, ousting a democratically elected Salvador Allende and replacing him with the brutal military dictatorship of General Augusto Pinochet who was far more friendlier to US interests in that area.

But things have changed in this hemisphere, and it is no more a place of banana-tepublics. It won't be an easy cake walk to cater to the wishes of Uncle Sam and its military industrial complex.

The ambitions of imperialist powers for a total domination of the world and bringing in a New World Order is rising. But will that ever happen in totality? Will colonialism get a new parasitic 'avatar' or will it be stopped in its tracks?