Syria: invasion of terrorist elements sponsored by the west

Official U.S. intelligence is the true leader of the "Syrian Free Army" 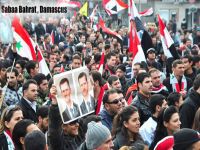 The Muslim Brotherhood party, is calling for military intervention...Turkey against Syria, has a militia trained by the U.S.

The Egyptian newspaper al-Arabi said on Friday that a colonel in the U.S. with the last name Cleveland is overseeing the operations of training and weaponry, and is the real leader of the "Syrian Free Army." The publication says that Cleveland is moving between the fields of training his organization.

The colonel in charge of creating an army consisting of armed men opposed to the Syrian government, called "Syrian Free Army," said the U.S. had created training bases in Turkey to the north, in eastern Lebanon, and Arbil in Iraq.

The Muslim Brotherhood party, which is demanding Turkey's military intervention against Syria, has a militia trained by the U.S. and their intelligence services. They are providing data and technical equipment to them.

The newspaper added that the intelligence services that are funding and arming mercenaries to fight the army of Syria require that all armed groups call themselves "free army."

Members of the Muslim Brotherhood admitted to being behind the protests in the province of Daraa in the south and Jisr al-Shughour in the north, and that they intend to form buffer zones as a prologue to military intervention. The article states that the page "Syrian revolution" on Facebook is managed by an intelligence network from Brussels, which had formed even before the events in Syria.