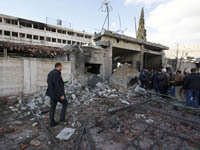 One of the true revelations of the Arab spring in Syria is the extreme inefficiency of its special services. In the past, legends about the power of Syrian special services were known far beyond the country's borders. The reason to write about them appeared again after the double terrorist attack, carried out in Damascus on December 23, near the headquarters of local special services. Car bombs killed dozens of people, including many workers and security officers.

It is an open secret that there are several types of special services in Syria, the Mukhabarat, the military intelligence, is the most important one of them. It would seem that the situation is under their control. In Syria, there is a grim joke, which says that every other Syrian national is a secret agent. However, the Syrian "knights of the cloak and dagger" were completely inconsistent in resisting the current attacks against the regime. Who else is supposed to prevent the attacks before they happen?

There are legends about the widespread corruption inside the special services of the country. However, it is fair to say that when the author of this article was staying in Aleppo and decided to make a night trip "without armed escort," the next day he received a fairly detailed report on where he was, how much money he spent and for which purposes. I was given a clear hint that the "big brother was watching over me."

It appears that I had a chance to experience the work of local security officers. But there is nothing supernatural there. Every taxi driver and every restaurant owner serve for Syrian special services, because they get to meet many people as they work. It's a piece of cake for them to keep tabs on foreigners, who are not numerous in today's Syria at all.

However, for some reason, they fail to detect the real enemies of the regime. It is not their first failure in Damascus. Suffice it to say that the Syrian intelligence services failed to prevent all large plots (Dera'a, Jisr al-Shougour, Der az-Zor, Hama, Lattakia, Homs).

Ali Salim Assad, one of the leaders of the Syrian National Committee, shared his views about the situation in Syria with Pravda.Ru.

"The Syrian security forces have shown the worst of them. The chief of state security of Homs and 90 percent of his employees have been arrested. It turns out that he helped the bandits and, apparently, he did it for money. Unfortunately, the system is rotten, corruption is everywhere. In fact, security agencies became a mafia structure, and it happened because they have been holding limitless power in their hands.

The things that happened in Dera'a and Homs, are not one-off events. Wherever there were armed uprisings, treason was there in varying degree. How could more than a hundred people get in a deadly trap in Jisr al-Shougour? There was a traitor among the state security employees, who delivered an unspoken order to the gunmen. The order, which was in effect before the beginning of summer, banned the use of weapons against those who take to the streets.

The power still hoped that the outbreak could be suppressed without much bloodshed, and that the situation would be resolved without excessive use of force. And a crowd of several hundreds of people, who believed in their own impunity, broke into the building occupied by security forces and brutally massacred the captured people. Such traitors could be found everywhere.

To remedy this situation, it is necessary to radically reform the system and clean it from similar elements. This is a major problem for the president, and he needs to make a willful decision for it.

The country found itself helpless in its hour of need.  The security system was defunct. Its omnipotence, as it experience showed, was a myth, inspired by repressions and terror of the past.

I must say that the problems in this most important sphere of the country appeared before too. For example, in 2008, Hezbollah's second most important man, Imad Magnet, was killed in Damascus. He was the military chief of the organization. He and his whereabouts were classified. He seemed to be invincible, because very few people knew him by sight. However, he died. And this happened in a specially protected area, which was controlled by Syrian intelligence services.

The Mukhabarat launched investigation and arrested many "sleepers" who cooperated with intelligence agencies of Saudi Arabia and the infamous Prince Sultan, who directed Riyadh's covert operations."

To this we must add that in some cases (such as in Dera'a), it is the activities of special services that gave rise to people's unrest. The riots sparked armed clashes across the country. The mutiny in Dera'a on March 15 started after state security services detained the boys, who spray-painted anti-governmental slogans on walls.

Local elders came to the services and asked to release the silly kids. The elders were told that they would no longer see them. Moreover, agents told the elders to bring them their wives if they wanted to have more children.

The government had a chance to begin a dialogue with the local population. They had to punish the perpetrators for it. However, the perpetrators, according to local sources, only lost their positions. They were not even jailed. It looked as if the regime covered the dark and heinous acts of its fosterlings. And the people rose up in Dera'a.

Sooner or later, they have to pay for such actions. Many may probably recall the events in Hungary in the autumn of 1956, when rebellious people would capture state security officials and hang them on trees and lampposts.

However, there are much more recent examples from Syria, with its inherent local "flavor." The events in Jisr al-Shougour in early June 2011 is a bright example. The whole world could see cell phone camera videos showing local residents dragging disfigured, mutilated and eviscerated bodies of yesterday's Mukhabarat officers. In Syria, you can hear many stories about the atrocities committed by the Mukhabarat. Even the people loyal to the regime say that those atrocities were "wild."