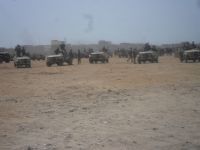 On December 21 the young Sahrawi martyr Sidahmed Abdel Wahab Said Dambar fell, murdered by a Moroccan policeman during the curfew which was submitted on the city of Laayoune, the capital of Western Sahara occupied after the dismantling of camp Izik Agdeim in November 2010.

Said Dambar was 26 years old, was a BA in Economics and worked in the occupied city of Laayoune, noted for his exemplary behavior with hisparents, being an outstanding student and athlete and worker, supportive and concerned with the situation suffered by his people.

Late Tuesday December 21, 2010, Said, leaving an internet cafe where he had just seen a soccer match of the Spanish league, minutes later he was intercepted two plainclothes police who asked for his identification. Depending on the version of eye-witnesses, Said did not carry documentation, which led to a hard argument with the police, thereupon and without any provocation or attempted assault, one of the officers draws his gun and fires a shot, hitting in the forehead between the eyes and eyebrow, the bullet in his head caused a severe brain injury and he could not recover.

Minutes later, his parents' house, located in the neighborhood of Casapiedra, was raided by a group of plainclothes police who sought documentation, taking with them Mohamed, his older brother, to the Department of the Interior, once there he was informed what happened to brother Said. The Governor of Laayoune tried to downplay this terrible event, and also trying to buy the silence of the family.

Since then, the family of this young man has been calling on the Moroccan authorities to tell the truth about the events surrounding his death. The body of the deceased Said Dambar continues to be held in the hospital "Ben el Mehdi" of Laayoune without receiving sacred burial, which contradicts all legal and religious norms.

The Moroccan authorities have consistently failed, so far, to give a comprehensive explanation of the circumstances and facts surrounding this murder.

The attitude to silence this crime that the occupying regime is carrying out, reaches such a magnitude when it permanently applies all pressure and intimidation on the family of the deceased martyr to silence it and not to claim justice for this young Sahrawi.

Social organizations such as Espacio Sáhara Lanzarote, Sahrawi Collective Association in Lanzarote, Lanzarote Association for Human Rights in Western Sahara, the Association of Families in Support of the Saharawi people, relatives of Said Dambar, and those signatories below demand from the Moroccan authorities TRUTH and JUSTICE for the case of young Said, an impartial forensic examination, that his remains be buried for his eternal rest, and a trial for whoever is responsible for his death.
At the same time we make an urgent appeal to respect occupied Western Sahara, and demand the immediate release of all Saharawi political prisoners.

December 22 will he the stage for an international campaign to demand Justice from Morocco, the occupying power in Western Sahara, a power which refuses to hold a referendum for the Saharawi people to choose integration or self-determination or independence, under the auspices of the UNO.

And where is the international community? Why, in bed with Morocco.