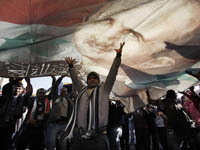 On December 19, Syria allowed Arab League observers to enter its territory. The observers will try to see that the Syrian government has been trying to end bloody clashes in the country peacefully. Arab League chief Nabil al-Arabi stated that the observers could fly to Syria in the next 72 hours.

Syrian Foreign Minister Walid Muallem stated that the country signed the protocol following the recommendations from the Russian partners. If Syria had declined the plan of the Arab League, the organization would have introduced sanctions against the country.

It may seem at first sight that the Syrian regime has surrendered. Arab and Israeli media outlets said that Damascus had accepted all requirements of the Arab initiative under Russia's pressure. To put it in a nutshell, Syria has manifested its weakness. However, Western publications say that Russia has played another trick to rescue the allied regime.

Those, who believe that the regime of Bashar Assad has lost the game, point out the fact that the Arab League observers would have to control the withdrawal of the troops from settlements, the liberation of all, who were arrested during the riots, and the beginning of the real dialogue between opposition and authorities.

It seems that Bashar Assad will dig his own grave, if he meets these requirements. For example, the cessation of the anti-terrorist operation in Homs and Idlib, would mean the appearance of the zone uncontrollable by the government. The zone would then quickly develop into the analogue of Libya's Benghazi - the springboard to overthrow the regime.

The same can be said about the liberation of all who took guns in their hands to protest against the regime of the Syrian leader. To crown it all, what kind of a dialogue can they have with the opposition? It is an open secret that the opposition activists, who do not want Assad to go, are already in talks with him. As for the analogue of the Syrian transitional national council, they can only accept Assad's capitulation.

One of the leaders of the Syrian National Committee, Ali Salim Assad, said in an interview with Pravda.Ru that the decision to let the observers in did not mean that Syria had surrendered.

It appears that observers from Russia, China and other countries will arrive in Syria together with the Arab League observers. They will not let the AL observers distort the information about the events in the country.

Ali Salim Assad also said that the Syrian regime may agree to withdraw the troops from the problematic zones indeed.

"If it happens, it will not mean that we will give those areas under the power of the insurgents. The army units can be replaced with internal troops and special forces subordinated to the Interior Ministry. As for the liberation of the imprisoned adversaries of the regime, Bashar Assad had already amnestied them twice. Nearly 2,000 opposition activists were released, but those people did not have blood on their hands. Releasing terrorists is out of the question.

"As for the possible dialogue with the opposition, I can say that the government is already in talks with those who want to talk. However, the West - the USA in the first place - does not want that. It's enough to resort to adequate statements from several top US officials, including Hillary Clinton. They urged the Syrian opposition to fight against Bashar Assad's regime."

On December 15, Russian officials distributed a draft resolution among the members of the UN Security Council. The resolution supports the cessation of violence in the country that has taken the lives of over 5,000 people. The resolution also condemns the violence used by both the government and the opposition, including the "inadequate use of force by the Syrian authorities."

The document also says that the Syrian administration should cooperate with independent international commission for the investigation of the facts of death of Syrian citizens. According to Vitaly Churkin, a Russian ambassador at the UN, the draft resolution mentions nothing about counterproductive sanctions against Syria.

Western officials have already criticized the document and said that it could not be accepted. State Department spokeswoman Victoria Nuland stated that the US administration would like to see tougher sanctions against Syria in the text of the resolution.

What is more, Western politicians assumed that Russia was playing another trick to keep the Syrian ally. The Russian draft resolution stipulates the prohibition of arms supplies to Syrian gunmen, as well as a complex of adequate measures on the part of the international community.

The West intends to torpedo the Russian resolution, because the document will make it hard to overthrow Assad. Nevertheless, Russia's actions come in handy to Syria. Moscow virtually hampers the measures against the Syrian ally.

It is absolutely clear that the arrival of Arab League observers in Syria is not going to change anything for the better. The League coordinates its actions with the West and Turkey. However, they can help Syria win some time. It is extremely important for the sitting regime to conduct the parliamentary elections in the country in the beginning of March 2012.