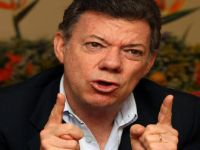 Yesterday, December 17th, twenty-five years passed since the assassination of Guillermo Cano, who was editor of The Spectator for thirty-five years. In his last editorial, embattled as always, he had written of threats and that he was confident that Colombia would be "able to move toward a more egalitarian, more just, more honest and more prosperous society." Twenty years later, it seems not.

Perhaps "more prosperous" is true. Even against a background of poverty, wealth is everywhere. Even optimistic reports of economic authorities can be true about the millions of Colombians who have left absolute poverty to move to a less horrendous situation, and the expression "democratic prosperity" is the slogan of the current government, though it is, I think, more of a promise than a tangible reality.

But it is true that, at the top at least, prosperity comes out of ownership of cars. It may not be felt in the collection of taxes, for anyone who can evades them. But note in the proliferation of tax lawyers, they measure the price per square meter of real estate, and one can smell the emergence of the always numerous and expensive restaurants that are always full. What you need is money.

They take to the auctions million of shares of whatever: state oil companies, insurance companies, condominiums, resorts, banks. And investors, like children, play games. Newspapers have become mere appendages of luxury brochures that advertise luxury items. Have you seen the price of each of the watches offered by the magazine SoHo?

And they opened a store in Bogotá, Ferraris and Maseratis, which would have stunned the very Thorstein Veblen, author of the Theory of the Leisure Class. Because the buyers of these supercars are in a country with no roads, but landslides, and in a city that has no streets, but holes. They will have to be content with running at 300 kilometers per hour on the polished wooden floors of the rooms in their homes. Yes, money is what exists.

But the other three predictions, or pious wishes, in the publisher Guillermo Cano testamentary have not been met...if so much money is private, and instead so little public money shows (the aforementioned lack of roads and streets, to say nothing of aqueducts and hospitals), it is because society is less honest.

It begins with the previously mentioned tax evasion. But also large amounts are stolen, and with absolute shamelessness. They steal the national budget for themselves, the departmental, municipal funds, the lotteries, liquor stores, the manhole covers.

Official bodies like Inco or the Anti-Narcotics Division serve as a transmission belt between thieves who steal from thieves. Officials and individuals steal, rich and poor, if they were not stealing, the money would not reach them. And to chase the thieves to justice is not enough. Not to mention that the justice system also steals.

Guillermo Cano was hoping for a more "fair" and also "more equal" society in another sense of the word justice. More egalitarian? A recent United Nations report puts Colombia third, after Angola and Haiti, among the countries that are examples of inequity in the world.

Inequality, as it is now called, in order to remove the stigma of what used to be called evil: great evil or injustice. No longer is it considered wicked: it is inequitable, it sounds less severe, but the evil is growing. The word 'inequality', which is not in classic Spanish dictionaries, does come in modern Panhispanic dictionaries, with the politically correct caveat that "it should not be confused with evil (evil or injustice)."

Colombian society is now more unegalitarian, more anti-egalitarian, though perhaps in the dictionary these words did not exist twenty-five years ago. There is more wealth, no doubt, but it is not "democratic," far from it, despite the government's advertisements.

On the Upside: it is even more concentrated than before. More Colombians, and not just three or four, and not just drug dealers, but also brewers and bankers, are included in the lists of the richest men in the world. And many more, three or four million-are begging at the traffic lights with a cardboard sign that identifies them or makes an apology that they are displaced by violence. The same violence that twenty-five years ago killed Guillermo Cano at the hand of the most haughty and famous, although not the richest or most powerful of the Colombian drug traffickers, Pablo Escobar.

And there is no justice. Twenty years later, the assassination of Guillermo Cano remains unpunished. And in the course of this endless process, a magistrate, a judge and a civil lawyer also have been killed.

Another Colombia is possible!