Find a home for a toothy orphan crocodile please 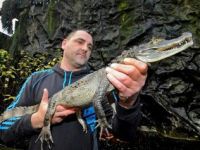 Abandonment of crocodiles in front of the pet store in England becomes 'routine.' For the 4th time in just a year and a half, the owner of Wickid Pets finds a box with a young crocodile

The owner of a shop that sells pets in the United Kingdom has always taken great care when he finds a box left in front of his shop. No wonder. This week, the fourth time in just over a year and a half, the owner of Wickid Pets found a box containing a young crocodile.

The animal, a meter in length, comes from South America and would have between four and five years old. It can reach up to 2.5 meters in length. According to the owner of Wickid Pets, Jimmy Wicks, legally acquired alligators often contain a microchip in their bodies.

''It was subjected to a scanner and does not have a chip in the body. Therefore, it obviously comes from the black market,'' he said.

The shop owner says that he is seeking a new home for the animal, possibly a local theme park, which exposes visitors to wildlife. Wicks says that crocodiles are not the only ''orphans'' that wind up in front of the store, located in the city of Wolverhampton in the west of England.

He said they have had to seek homes for turtles, birds of prey, snakes and lizards found in front of the establishment.