Ahmadinejad says thanks for the Christmas present 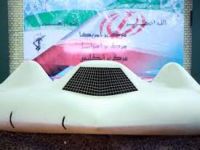 Ahmadinejad on the spy drone that Iran captured: "Perhaps the U.S. sent us this, as a present, the robot spy?"

Iran's President Mahmoud Ahmadinejad scoffed and mocked, in an interview broadcast on Venezuelan television, the U.S. officials who refuse to admit that expert hackers in a cyber-war corps of the Revolutionary Guards of Iran tracked and assumed the remote control of the stealth RQ-170 Sentinel drone spying on Iranian territory, and managed to land it without damage.

Ahmadinejad said that soon the U.S. will be convinced of the new capabilities of Iran: "We have an ongoing program to mass build high-tech drones invisible to radar," he said.

Iran's president smiled when asked why the U.S. military refused to accept that Iran tracked the electronic system of the drone, took control of the device and it landed without damage. "Either they accept the obvious or ... perhaps the United States sent us this as a present, the robot spy? "

He said that Iranian specialists had no trouble tracking down the spy drone and that they also already have gained access to the databases installed on the device.

On the humanitarian action to free three young American spies who crossed the border into Iran from Iraq, President Ahmadinejad stressed that Iran is a country of high culture and civilization and that Iranians are not enemies of the American people. "Our problems remain exclusively with the system that governs the U.S.," he said.

He added that the Iranians hope that the U.S. government rewards this humanitarian act, to release the three Americans and also taking measures of a humanitarian character.

"We still hope that they act with the same magnitude, but the colonial past of the system that now controls the U.S. will never admit humanitarian action and human greatness."

On the nuclear question, Ahmadinejad said the U.S. government accuses Iran of working to build atomic bombs, and refuses to understand that Iran does not need atomic bombs, nor does Iran even want to have them.

For Ahmadinejad, "Those who accuse Iran of producing atomic bombs are the same ones that dragged the U.S. into the darkest days of colonialism, the decimation of Native Americans by the explorers, who now live by systematically looting the wealth of other people."

About the western coalition that presents itself as a coalition of democratic countries, Iran's president said the United States and its allies do not trust or believe in democracy, and they always put the interest of the profits above any democratic yearning.

"The U.S. today wars against several people, only to try to solve their own economic problems. They do not defend either peace or democracy."