Syria has another armed infiltration from Turkey 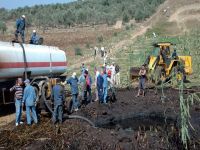 The Syrian government unveiled on Tuesday (13th) that they managed to thwart another attempt at infiltration by an armed group in Turkey through Ain Baida in the region of Badami, Idleb province.

The Border Guard Command informed that its troops intercepted a band of 15 armed individuals, and in the armed confrontation, they killed two and wounded the rest.

The operation was performed successfully after border patrols monitored the movements of infiltration by the armed group, before facing them, officials said, adding that their unit suffered no casualties of any kind.

"Our border guards are ready and prepared to face anyone who thinks they can breach the security of the Syrian people," states the press release issued on Tuesday.

On December 6th, SANA news agency recalls, border units also prevented a group of 35 armed men from entering the same point on the frontier between Syria and Turkey, injuring some of them.

Several media outlets, such as the Czech newspaper Pravo reported that Syrian extremist groups, linked to the Salafist Jihad and the Muslim Brotherhood, as well as mercenaries from several countries in the region, among them some Libyan terrorists, trained in camps in Turkey and Lebanon, who then attempt to infiltrate Syria.

The Lebanese military authorities have captured and imprisoned individuals involved in the trafficking of weapons and ammunition destined for Syrian territory.

Syrian forces are fighting against heavily armed gangs operating mainly in the province of Homs, who also launch attacks and kidnappings in the rural towns of Hama, Daraa and Idleb.

The agency SANA reported that Brigadier General Ghanim Ibrahim Hasan, instructor at the Assad Military Engineering Academy, was shot dead by gunmen near the town of Saraqeb in Idleb, as he went from Aleppo to Damascus, where he worked.

Authorities also said they recovered four boxes of stolen tickets by another gang in Talkalakh, while a bomb caused damage to a gas station near Rastan in Homs. The resulting fire was extinguished by the explosion.

This station supplied fuel to the power station of Maharda.

On Sunday night, Syrian forces located and faced a terrorist group in the same province that on Saturday had assassinated the engineer, Maher Ghadir, as he went to work at the gas factory in Abu Rabah.

On Monday, an armed group tried to disrupt the elections of local governments in Sham Golan, in the province of Daraa, and fired at security forces, killing three agents according to the Syrian News Agency.

With information from Prensa Latina