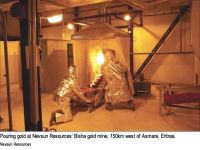 In the bizarre world of the UN inSecurity Council, the Monday, December 5th, passage of further "sanctions" against Africa's fastest growing economy, targeting Eritrea in the Horn of Africa with its projected 5 years of double digit growth rate, should come as no surprise.

By a vote of 13 to 0, with China and Russia abstaining, the UNSC passed a second round of sanctions against Eritrea, the first being almost exactly two years ago.

Of note was the USA's Susan "Doctor" Rice, once Bill Clinton's black sergeant at arms in Africa and today the first US Ambassador to the UN to hold a White House cabinet seat doing every thing she could to successfully prevent Eritrean President Issias Aferworki from appearing in front of the inSecurity Council (even the BBC was forced to note such).

A promise is a promise and Susan Rice had "promised" (one of those she meant to keep) that new sanctions against Eritrea would be passed and they were. Even the Brazilians, Indians and South Africans raised their hands at Susan Rice's demand. Such slavish kowtowing in support of Pax Americana has long lost its novelty, putting a lie once again to any claim to principles in the leadership of the developing world.

The "sanctions" passed against Eritrea on Monday are all bark and no bite, less even then the first batch.

The first version of this latest round of sanctions, (that even the Europeans vetoed) would have crippled Eritrea's emerging mining industry, one of the main drivers of its new found economic engine and blocked Eritreans abroad from paying their 2% income tax, which has long been the basis for Eritrea's very survival.

Why is the Obama White House so hell bent on destroying Africa's fastest growing economy?

According to the Obama White House Eritrea supports terrorism in the Horn of Africa, that is to say in providing arms to the Al Shabab Somali resistance. Of course the Obama-mafia didn't invent these charges, that was done back in the Bush Administration in 2007.

Now, thanks to Wikileaks, we know that the senior US diplomat in the Horn of Africa, US Ambassador to Ethiopia, Donald Yamamoto, told his bosses in Washington D.C. in 2007 that the Eritrean involvement in Somalia was "insignificant" as in very small or trivial.

Before Wikileaks, we had the UN General Assembly's Special Committee on Somalia Report in 2009 under South Africa's Ambassador, Dumusani Khumalo, which exonerated Eritrea and placed the blame for the influx of arms into Somalia squarely on Ethiopia and the UN funded Ugandan and Burundian "peacekeepers" occupying Somalia's former capital of Mogadishu.

The first round of UN inSecurity Council sanctions against Eritrea which were passed in a closed door Christmas Eve vote in 2009, and included an arms embargo, which hurt. Ethiopia invaded Eritrea in 2000 and still has Africa's largest and best equipped army with some 500,000 of them on Eritrea's borders and even occupying Eritrean territory. Enforcing an arms embargo on Eritrea under existing conditions is a violation of Eritrea's right to self defense and a violation of the UN Charter itself.

The December 5, the UN inSecurity Council "sanctions" were really just recommendations, calling on the parent countries of the mining companies, today just Canada, to harass Eritrea at any and every opportunity. It also calls for countries where Eritrean citizens in the diaspora pay their 2% income tax to the Eritrean government to do their utmost to harass said Eritreans in the process.

All bark and no bite, so why the fuss and insistence by Doctor Rice on some semblance of punishment being unanimously passed by the UN inSecurity Council?

The last time sanctions against Eritrea were passed the day before Christmas in 2009, it turned out they were targeting the nascent Eritrean mining industry and successfully derailed the bank based funding of $170 million for a small, once nearly bankrupt Canadian mining company Nevsun Resources had arranged for its Bisha mine. Nevsun had the foresight to arrange alternative securities market financing before-hand, just in case, and today Eritrea's first gold mine is pumping out $2 million a day in gold and getting ready to produce twice that amount in copper and zinc.

Eritrea's second gold mine is scheduled to start construction in 2012 and is in the midst of trying to arrange the $80 million it needs to get up and pouring gold (Eritrea has already exercised its right to purchase 30% of the company, $32 million making Eritrea's total investment and royalty stake 40%).

A second successful gold mine could easily kick start the mining industry into high gear in Eritrea and see the proposed $750 million potash mine succeed in Eritrea's Danakil Depression. With a planned output of up to 10,000 tons a day of potash and a life span estimated at 150 years, Eritrea stands to share in tens of billions of dollars in mining profits. This is a far cry from the likes of the Anglo-Americans world's largest gold mine in Tanzania which pays the standard 5% royalty.

So, 40% for Eritrea for their gold versus 5% for Tanzania? It isn't to hard to see why the USA wants so badly to see Eritrea's upstart mining industry fail.

Unfortunately for the Obama White House, all its promises to help bring about "regime change" in Eritrea came to naught and all Doctor Rice could claim was a little face, for "sanctions" that were ultimately passed though their effect on the next Eritrean gold mines financing have yet to play out.

In the mean time, the Al Shabab resistance in southern Somalia continues to buy black market arms stamped "made in the USA," sold to make up for embezzled salaries by the Ugandan and Burundian "peacekeepers" who oversee 30 square miles of shot and shell blasted Mogadishu, where once half a million Somalis flourished, now left to slowly starve in UN refugee camps.

The war on the Somali People continues with Kenya now providing "peacekeepers" in a bid for UN funding, trying to deflect domestic anger from its failed invasion of Somalia and its promises to capture the Al Shabab controlled port city of Kismayo.

Here in the Horn of Hunger the saying goes "up is down, black is white and wrong is right," where the UN inSecurity Council practices a bizarre, and dangerous form of "just-US," displaying for all those who care enough to see just how UN-just the world really is.

Thomas C. Mountain is the only independent western journalist in the Horn of Africa, living and reporting from Eritrea since 2006. He will be speaking in London on the afternoon of Dec. 17, 2011 at the Friendshouse.