CIA's secret prisons continue to surface here and there 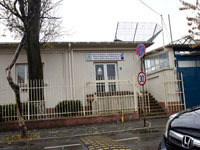 One of CIA's secret prisons was probably located in the capital of Romania, Bucharest. Reporters of two Western media companies visited the European country, to take a look at the place, where the CIA could keep its Afghan POWs.

The subject of CIA's secret prisons has surfaced again after an anonymous agent of US special services unveiled information about the existence of the prison code-named "Bright Light." According to him, US special services would keep prominent al-Qaeda members in the "romantic" prison. Sheikh Mohammad, a suspect of 9/11 attacks in the USA, was also kept at the Romanian prison, the officer said on conditions of anonymity.

The former intelligence official also said that the prison had supposedly started working in the autumn of 2003. It happened after the CIA decided to relocate its prisoners to Romania from a secret object in Poland. The Romanian prison operated for three years. In 2006, all the prisoners were delivered to the notorious Guantanamo base.

According to the agent, the secret prison was inside the National Registry for Classified Information in Romania. The registry receives all the data from NATO and the European Union. The crews of the Associated Press news agency and Germany's ARD Panorama TV company managed to visit the secret object.

Adrian Camarasan, an employee of the registry, said that the Americans had never been the masters in the prison. The location for the prison was perfect, the officer said. Local residents knew that there was a state-run institution in the building. However, it could never occur to anyone how they used the basement of the respectable building.

According to the Romanian official, there were six cells in the secret prison. The prisoners were tortured there for about a month. Afterwards, the attitude to the prisoners began to improve. Doctors would often examine them, whereas the food for the prisoners would be cooked according to Islamic requirements.

The story raises many questions to both the United States and Romania. The subject of CIA secret prisons appeared in 2004-2005, after the report from Swiss deputy Dick Marti. An article on the subject in The Washington Post followed soon afterwards. The Observer provided the list of the countries, where the CIA had its secret prisons. The geography of that was astonishing indeed: Morocco, Egypt, Qatar, Saudi Arabia, Thailand, Ukraine, Lithuania, Poland and Romania. The suspects would be tortured with the imitation of drowning, cold, loud music, pork (which all Muslims reject), sleep deprivation, etc. Human rights activists showered then-President George W. Bush with criticism, but US officials, including former Defense Secretary Donald Rumsfeld, rejected all of those claims.

The USA eventually acknowledged the existence of secret prisons. However, US officials did their best to justify the use of severe methods of interrogation. According to them, it was the only language that terrorist suspects could understand.

The US reputation was stained. Barack Obama ordered to close all secret prisoners as soon as he took office as President. Attorney General Eric Holder said that the activities of the CIA would be investigated. However, the investigation moves at snail's pace.

One may have many questions to the countries that agreed to provide their territories and premises for the secret prisons. Lithuanian President Dalia Grybauskaite admitted two years ago that the CIA had a secret prison not far from Vilnius in 2003-2004. Lithuanian ex-President Valdas Adamkus was aware of all that, of course, but he simply got away with it.

A similar scandal has begun in Poland as well. Tomas Hammarberg, the Council of Europe Commissioner for Human Rights, stated that there was a secret object in Poland in 2002-2003 too. According to the official, two extremely important prisoners - Abd al-Rahim al-Nashiri and Abu Zubaidah - were kept at the secret prison in Poland. Neither Polish President Bronislaw Komorowski, nor Prime Minister Donald Tusk have said a word on the subject yet.

It appears that it is now the turn for Romanian President Traian Basescu to explain the presence of CIA prisons in his country. He came to power in 2004. It was in his power to close the prison, but Basescu did not do it. The above-mentioned employee of the Romanian Registry for Classified Information said that the Romanian administration was aware of that all. It just so happens that European countries can turn a blind eye on their sovereignty to please the USA. Does that mean that Romania, Poland, Lithuania and many other "sovereign" countries are not quite independent?