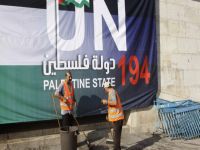 The Palestinian National Authority (PNA) states that "it will not retreat" in their efforts for the UN to recognize it as an independent state, while Israel has conditioned the release of money to the supposed suspension of this initiative.

The chief Palestinian negotiator, Saed Erakat, pointed out that the purpose for being recognized as a State increases, but he admitted that it is currently impossible to succeed because of the U.S. veto in the Security Council.

While speaking to the news agency, Maan, Erakat warned that the PNA will persist in its diplomatic offensive until "they respect our right to establish a state on the prior borders of 1967," the year that produced the Israeli invasion and occupation.

He recalled that the Palestinian leadership decided to continue with their plan, even knowing beforehand the U.S. would veto the initiative, which - but it was useful he said - they will again have it put to a vote "in the near future."

In declarations this week in Austria, the President of the PNA, Mahmoud Abbas, said the request before the UN was meant to save the "two states" solution (a Palestinian one and an Israeli one), and asked his people not to feel frustrated by the lack progress up to now.

"We are not going back (...) we went to the Security Council, we will go a second time, and a third. We will not surrender," Abbas said.

Soon after Erakat's comments, Israel announced that it will unlock millions of dollars in funds of PNA that were frozen in retaliation for its acceptance as a State in UNESCO.

The money corresponds to customs duties and other charges that Israel collects in the name of the Palestinians and transfers each month to the PNA as part of internal agreements.

Sources of the government of Prime Minister Benjamin Netanyahu said the money would be freed due to pressure from the United States and the European Union to try to unlock the peace talks, despite maintaining a clear partiality and bias toward the Zionist state.

Netanyahu said the release would be made after the PNA halts what he described as "unilateral actions" to be recognized in the UN, but threatened to "reconsider" the decision if the Palestinians resume these diplomatic actions.