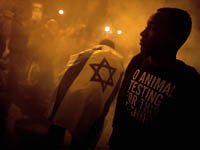 Global change in the Middle East caused by an epidemic of revolutions can significantly affect the fate of entire nations. Israel (understandably) does not hide its fears with regard to strengthening the position of the Islamists in Egypt, Syria, Libya and Tunisia. Meanwhile, in many Middle Eastern countries there are thousands of Jews who care about who comes to power at the end of the Arab revolution.

While the topic of the Arab-Israeli conflict is traditionally on everyone's lips, not much is known about the situation of Jews in Muslim countries. First, it should be noted that all those who wanted to leave have long ago left Egypt, Syria and Lebanon. Those who are still there tend to remain loyal to the authorities and co-exist peacefully with the Arabs.

The number of communities along the border with Israel states is small, from several dozens to several hundreds. Meanwhile, in the first half of the twentieth century in many Arab countries the number of Jewish communities was quite large. Most adherents of Judaism lived in conditions of relative economic prosperity.

Jewish community in Iraq is considered to be one of the oldest, and goes back to the 6th century BC, the reign of the Babylonian king Nebuchadnezzar. By the beginning of the 20th century, the Jewish population here amounted to 120 thousand people. After the British left the country (in the early 1930s), persecution and pogroms have ensued.

During the Second World War, Britain was at war in Iraq against rebel Rashid Ali Gailani who defected to the German side. The British failed to prevent Baghdad pogrom of 1941 that killed 175 people. The arrests and unjustified dismissal of Jews continued in the 1950s-1960s. However, due to the legalization of immigration to Israel, the Jewish Agency was able to organize the mass exodus of Jews from Iraq.

During the mass emigration in the early 1950s over 100 thousand people have left the country. Now there are approximately 100 Jews residing in Iraq. They are forced to lead a secluded life, fearing persecution by extremists. In Baghdad, there is one functioning synagogue that operates under the organizing committee representing the interests of the community.

The history of Egyptian Jews in the 20th century, in fact, differs little from the history of Jews in Iraq. By 1922 the Jewish population in this country has reached 80 thousand. Nationalist groups activated in Egypt after Israel's declaration of independence. The bloody Arab-Israeli war that began in May of 1948 could not but affect the position of Jews in Egypt..

At the official level persecution was registered in legislative acts. In particular, a decree was issued forbidding the Jews to leave the country. Mass arrests have ensued accompanied by confiscation of property. Getting permission to leave the country could be only possible by donating a great deal of money to the "Soldier's Fund." After the riots in 1952, 25,000 Jews left Egypt.

As a result of the July revolution General Mohammed Naguib came to power who proclaimed the principle of religious freedom. It would seem that the position of the Jewish community has improved somewhat. However, two years later Gamal Abdel Nasser came to power, and riots and arrests resumed.

Only after the dictator's death in 1970 came a slight improvement in the situation of the Jews. By this time only 300 Jews remained in Egypt. By the early 2000s, young people were almost gone; and the last Jewish wedding was celebrated in 1984. Currently there are only approximately 30 Jews residing in Egypt.

30,000 Jews resided in Syria in the 1950s, while today only 200 of them are remaining. Meanwhile, Syria has recently launched a major restoration project of 10 oldest synagogues in the country. The project is funded by the Jewish community of Syria and President Bashar Assad. It is not ruled out that this way the Syrian leader wants to show a secular, non-Islamic character of his state.

The largest Jewish community lives in Iran and counts over 25 thousand people. Despite the increased tension between Tehran and Tel Aviv the position of the Diaspora remains relatively stable. There are 40 synagogues in the country, Jewish schools and kindergartens are allowed to operate. In addition, the capital has a Jewish nursing home and a Jewish library. The country took care of the political rights of ethnic and religious minorities. Jews have a representative in the Iranian parliament.

The 20th century brought Jews in the Middle East the hardest trials. In Syria, Egypt and Lebanon very few of them are left. However, some Arab leaders interested in strengthening of their image both in the East and the West have demonstrated their commitment to the principles of tolerance and religious tolerance in particular. It is no accident that Bashar Assad supported the Jewish community in Syria.

Despite the strengthening of the position of radical Islam, governments of Egypt, Syria, Tunisia, and Yemen are not interested in the infringement of the rights of Jews in their countries . It is much more advantageous for them to play on anti-Israel sentiment. Israel, as envisioned by spin doctors, in the eyes of world community must act as an unjust power violating the rights of the oppressed Palestinians.

However, in the event of a full-scale war of one or more Arab countries with Israel the consequences for small Jewish communities in the Middle East can be very severe.