Egypt: Bloody illusion of the power of the crowd 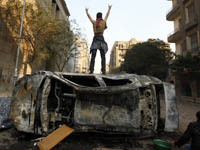 The situation in Egypt on the eve of the planned November 27 parliamentary elections is becoming more volatile. Like early this year, the blood is shed at Tahrir Square in Cairo. Under pressure from the streets the government has resigned. The aggression even spilled over a former female student who did a candid photoshoot.

Prior to the recent events in Tahrir Square Egypt was mentioned in connection with a juicy story. 20-year-old former student of an American university Alia al-Mahdi posted her candid photos on a social networking site. They were accompanied by the text that in a patriarchal Muslim society would be deemed political. In her "Diary of a rebel," Alia al-Mahdi demands to free women from male dominance. She addresses the "society of violence, racism, gender discrimination, sexual harassment and hypocrisy."

From the first Alia's record, a part of the online community and journalists have concluded that she was an activist of "April 6 Movement." However, in the end she stated that she has never formally been a party to this "April 6". But the genie was already out of the bottle. Conservative forces began to threaten her with death, not necessarily at the hands of religious fanatics, but an appeal to the prosecutor's office with a complaint about "incitement of the spirit of obscenities, damage to morale and insulting Islam." Left liberals carefully distanced themselves from the "naked revolutionary."

Meanwhile, last weekend at Tahrir Square an impressive crowd gathered again where the Islamists stood out. 40 Israeli women have decided to give moral support to Alia. They organized a social networking campaign in her support, entitled "Love without Borders". The initiator of the action Or Toepler invited women "with non-violent and legal means support a woman who, like us, is young, ambitious and full of hope and seems to have a developed sense of humor."

But the young Egyptian who challenged the traditional foundations of the country, quickly retreated into the shadows. Those gathered at Tahrir Square demanded the resignation of the government of the Military Council in whose hands the power has been concentrated after falling of the former regime of President Hosni Mubarak earlier in the year. Among the demonstrators supporters of the "Muslim Brotherhood" and even more radical Islamists were dominant. It has come to a clash with the police, which continued until Monday night. There were at least 28 victims.

Protesters' requirements were partially met. The Cabinet of Ministers headed by Isamu Sharaf has resigned, but the Military Council did not accept it right away on the pretext of the need to weigh all the candidates carefully and find the head of a transitional government. The former head of the International Atomic Energy Agency (IAEA) Mohamed ElBaradei is likely to be nominated for this position. The fact of his appointment was delayed and the crowd at Tahrir was not going to disperse.

The activists of the "April 6 Movement" said they would not leave the area until the military name the exact date of transfer of power to civilian administration. On the evening of November 22 people began arriving in Tahrir again, and clashes with the police resumed. "Muslim Brotherhood" condemned the use of force by law enforcement officers, but preferred to deny arranging the new rally. Meanwhile police have decided to keep the defense directly at the building of its office located near Tahrir.

Meanwhile, the staff of Cairo airport supported the call of some political parties to organize a strike. They lay down right on the runway, demanding increase in wages by 80 percent, and the police did not disperse them. As a result, flying from the Egyptian capital has become difficult. The Cairo Stock Exchange responded to the event as well. Its main index EGX-30 fell by nearly 4.5 percent, and the trade was delayed.

Late in the evening of November 22 head of the Supreme Council of the armed forces Hussein Tantawi addressed the nation. He announced that the Government has accepted the resignation but asked the ministers to perform their duties until a new cabinet is formed. He also met the requirements of the streets and set a date for the transfer of power to the new civilian leadership: it will happen after the presidential election to be held no later than 30 June 2012.

This solution did not satisfy the demonstrators in Tahrir. "We will not repeat our mistake and will not leave the square until the military leave power," stated one of the posters. "Politics is not for the Military! Back to the barracks," shouted the people. According to them, the military should be replaced by the "presidential council" that would include all presidential candidates. The new body should be chaired by the former director of the IAEA, Mohamed ElBaradei.

There was another rough night in Cairo. The total death toll at Tahrir Square has reached 31 people, the number of victims exceeded 700. Clashes of the protesters with the police were also reported in Alexandria, Ismailia, and Port Said. Cairo area Abbasiyah also had a counter-demonstration of supporters of the Supreme Military Council. It seems that Egypt will not calm down any time soon

How much does the Supreme Military Council control the situation in Egypt? Who is behind the recent unrest? Will the protests subside any time soon? Sergei Demidenko, a Middle East expert at the Institute of Strategic Studies and Analysis commented on the situation in an interview with "Pravda.Ru"

"The Islamists stand out among the protesters, but they are not the only ones to make the people come out on Tahrir Square again. The inertia of the events of the beginning of this year when unrest led to the resignation of President Mubarak also played its role. Many of the demonstrators have an illusion that they now control Egypt. But this is only an illusion. Egypt is not controlled by the crowd and the demonstrations will soon subside.

Although the situation in Egypt is poor, the Supreme Military Council controls it. Military men behave much tougher than the longtime leader Hosni Mubarak ousted earlier this year. At the same time the military are not only tough, but competent and consult with political parties.

The situation is likely to evolve according to the Turkish scenario. It implies a departure from the formal authority for closer monitoring of the development of political processes. Such control may be implemented through a presidential candidate (for example, Omar Suleiman), through the control of the Parliament. And if something goes wrong the army would intervene. This happened in Turkey more than once, and Egypt is moving the same direction.

The election of Prime Minister Mohamed ElBaradei is very convenient for the military. This man does not enjoy great popularity in Egypt unlike, for example, the former secretary general of the League of Arab States Amre Moussa. Islamists do not consider him their own, the family of the former director of the IAEA lives in Italy. Thus there are all conditions for the formation of the liberals and the military alliance against the Islamists.

The Islamists (who surely will take a great deal of seats following the elections of November 27) do not constitute a monolith. The "Muslim Brotherhood" is split into moderate and radical. The former led by Muhammad Badi under Mubarak were "built into the system," and brought their deputies to the Parliament under the guise of independent candidates. Another thing is that radicals broke away from them. They arrange attacks on Christians, bombs pipelines. It would be great that a moderate portion of Islamists got into the parliament. "