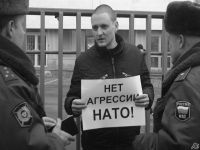 Colonialism and subsequent occupation of land has had a parasitical effect since the dawn of civilisation. The effect of a foreign object inside a human body creates the same trauma and has same effect as that of colonialism. The human body, with natural abilities, tries to fight off the foreign object. When it fails, the object becomes a parasite.

So does the colonial power, a parasite on the land it feeds and thrives on. The ultimate victim is the occupied host land and its people. It dries up, almost like a twig in the hot sun. The human brain, too, denied of its freedom to think and act by the parasitical entity, suffers a long time till the colonial power is eliminated.

In the current situation, Iran sits precariously while the group of six influential countries decide its fate. The six nations include Russia and China, who have asked for a final report of sorts from the IAEA on Iran's nuclear capabilities. Whether there is any military uranium being processed or not in Iran needs to be determined.

If something goes wrong, Iran can expect a taste of a few 30,000 kilo bombs that are at the disposal of the USAF. In fact, the Yankee dimwit fascists already have their finger on the trigger to launch an onslaught.

If Iran falls, one more territory will come into the fold of the imperial powers. The Zionist entity of Israel will certainly be glad to see the success of the imperialist powers. At this time, whether it will remain a sovereign state with a modern infrastructure or be reduced, not to the glory of ancient Persia, but the rubble of it, is a matter of concern.

Syria escaped by a cat's whisker, thanks to a timely veto by Russia and China, and got saved from certain destruction by the Axis of Evil - US, the UK and France, often referred to as FUKUS. But the blood thirsty generals in civilian garb can pull the wool over the eyes of the world and still launch an attack on Syria with some pretext or other.

They do not need any approval these days from any internal body to launch an attack or continue with one, it seems. But Russia has warned the imperial powers from any mischief or deviating from the UN veto that has prohibited use of force on Syria.

But in the worst scenario, if the imperialists do break the veto, what can Russia or China do? Go on a hunger strike in front of the UN building in New York City?!

It is better still to save or empower the veto, with these two countries jointly or individually putting a battalion in Syria if a hint comes along the channels that the US may override the veto and attack Syria. But will the two giant neighbours do this? This will be a direct challenge to the imperialist US to get prepared for the start of the 3rd World War!

This type of an incident did take place during the 1971 Indo-Pakistani war that resulted in the creation of a new Bangladesh. During this crisis, Richard 'Tricky-Dick' Nixon the then president of the US warned Indira Gandhi to stop the war on Pakistan or face US bombs! To stick to his threat, he sent the US Navy's 7th Fleet from the Pacific to the Bay of Bengal comprising of an aircraft carrier and some warships.

But right behind came Soviet nuclear-armed submarines sent by Leonid Brezhnev who bluntly told Nixon, "You bomb India and we shall sink your 7th Fleet and get prepared for the beginning of the Third World War!" The 7th Fleet was forced to flee back to its base in the Philippines.

Could a similar scene be played out or repeated if Putin or Wen suddenly decide that enough is enough? Would they then deploy their personnel in Syria or even Iran as a challenge to the hegemonic powers of the West? We have to wait, hope and see!

The expansionist powers of the imperialist west have pocketed Iraq and are trying it on Libya by unleashing their brutal military powers on these hapless nations that resulted in the loss of many thousands of lives that included the elderly, women and children.

The light-sweet crude oil produced in abundance in this region has now been transformed into heavy-bloody crude oil since the blood of the innocents has flowed through the sands of Arabia to mix with their national asset! The hands of the imperialist west are soaked in this and it will take an eternity to cleanse them. Now they are trying to make them bloodier by bombarding Iran and possibly Syria.

With the Goebbelian/Murdochian propaganda machine by their side, these imperialists have succeeded in spreading false information on their intended targets in North Africa and the Middle East. Recently there was a video of a purported assassination attempt on an opposition politician in Venezuela. I feel it was doctored, being the start of instigations against Venezuela as a possible target in the name of human rights!

The imperialist bullies are surely trying to turn the heat up on Latin America too. So the bottom line is that anyone who is against the US or its policies will be targeted for assassination, individually or as a country en-masse.

Returning to Iran, Russia very recently stated that more nuclear reactors will be built for civilian use. But is this statement enough to dissuade the imperialist marauders from attacking the so-called 'selected targets'?

If some drastic steps are not taken by Russia and China, who have high economic stakes in Iran in the coming days, an attack by imperialist US and UK, as well as Zionist Israel is almost certain to happen. If the trio succeed in sending Iran back to the very old days of Persia, it will add another bloodied-feather in the cap for them, while the world sits quietly and watches, incapable of doing anything else.

Emboldened, the economically and morally bankrupt imperialist powers will try and encompass both Russia and China militarily along the Atlantic and Pacific coasts. The recent deployment of about 3,500 US Marines in Australia is one example.

The hegemonic tendencies of these arrogant powers can still be nipped at this stage. But by whom and when? Putin and Wen are you listening?