The fall in combat of commander Alfonso Cano 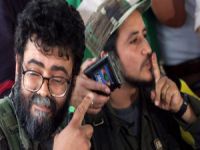 The fall in combat of commander Alfonso Cano

The death in combat of Comrade Commander Alfonso Cano is mourned by the whole world anti-imperialist movement, all victims of capitalist exploitation, the universal movement for socialism, each of the people who raise flags of sovereignty, dignity and democracy. It afflicts profoundly good people on the planet, particularly in Latin America, the Caribbean and Colombia.

It also pierces deeply into the noblest fibers of their loved ones. For them we send our embrace. We share their pain intensely. We know better than anyone what this loss means. We extend the same too painful care for the families of soldiers who fell in the same events. Their blood and lives inspire us, now, toward future victories.

The tears of happiness of President Santos reveal that, for his work, a great one of truth fell, an amazing man, a revolutionary of historical carving. A formidable interlocutor they had to get rid of before any attempt to approach. We now accept the challenge. As Manuel and Jacobo, Alfonso was always known as a great teacher. And we could learn from him.

His ideas and his brilliant drive are part of the ideological, political and military arsenal of the FARC-People's Army. No one can ever snatch them from us. His talent and revolutionary activity grew and matured along with our history.

On the days of Marquetalia he was already serving in the ranks of the Communist youth. Until his death in combat, nothing could distract him from the struggle.

He completed fifty years of continuous uproar against the regime, years marked by a profound capacity for analysis and an enviable political and ideological coherence. In Bogota, a simple and refined humor, student and community leader, an anthropologist at the National University during tough times, daring underground militant who will be an eternal example of an intellectual committed to the death.

His enemies, both the Yankees and the oligarchy, never get tired of trying to erase their work with low expedients. Alongside his political profile, Comrade Alfonso Cano has proven to be possessed of a high military capability. Learning to lead, the first command was set in the Central and West, then without all of the FARC.

The level at which today's fascist militarism frightens Colombia, they know very well what FARC stands for. The real expression of the organization is the unwavering struggle against capitalist globalization.

We are a people in arms denouncing and combating the terrorist nature of their market democracy. Thousands and thousands of women and men march by way of the compact construction of a nation and of a world without oppressors.

The oil producing reserves of Colombia, in the rhythm that they want to extract it, will cause it to be completely exhausted in the next four years. They intend to deceive us with the idea that, before that, enough oil will be found to satisfy many other demands.

Our destiny is to save ourselves with our existing oil reserves, and pay imperialists with the proceeds of this credit to plunder from the functioning infrastructure.

Obviously the credits will be granted by international banks. And to get them, the country should commit to carry out large and growing budget cuts in the social area for the Colombians. Tax reforms in the pension system, labor, health and education. This attack now advances full steam in the Congress of the Republic.

The Free Trade Treaty (TLT) and indecent openness to foreign investment threatens to devastate the most valuable human assets, environmental and economic clout. Gigantic auriferous, coal, tourism, agro-industrial, agricultural and bioenergy projects, among others, and the plunder of our wealth, will crush labor with impunity to intolerable degrees.

It is in quick execution a model of unequal and unpatriotic development, the result of manipulations woven from the presidential palace and the different ministries, approved in haste by the legislature and declared enforceable by the courts, which does not minimally take into account the opinion of the Colombian people nor of its most immediately affected.

And said model, which was begun decades ago with a violent paramilitary strategy, is presented as the economic salvation of the country, the locomotive that will take us forward. It is rooted in the most expensive interests of transnational capital and the corrupt ruling class in Colombia, which are enriched with fabulous sums after each agreement and contract concluded.

There are only two forms of struggle that oppose in the courageous and persistent form: the street struggle in marches and protests and the guerrilla struggle in the mountains, that have the ability to influence or determine the decisions somehow linked to the development model. The recent provisions on "public safety" commits the first crime and punishes with imprisonment. At the same time they are demanding demobilization of weapons collected under the threat of total annihilation.

Such is the picture that takes shape in which there is a desperate desire for FARC-EP to surrender. We know very well what President Santos' purposes are: to further enrich the wealthy and to sink further into poverty the poor. It is therefore of cardinal importance as a consequence, to build the bridges needed to strengthen, unify and defend the two existing forms of struggle.

Mass mobilization and guerrilla warfare are called to converge in strategic training for a political solution to the conflict being waged in Colombia. The war is but the oligarchical and imperial determination to close all avenues of opposition to their plans of plunder, the packet with which the ruling classes expect to crush the rebellion.

The heroic resistance of the Colombian insurgency, just as the loud voice of the mobilized protesting people, cannot end with a false call for negotiation and consensus. Any attempt to demobilize the popular struggle without making solutions to eradicate its causes is doomed to failure. There can be no peace with repression and hunger.

FARC-EP pays heartfelt tribute to the memory of our Commander, Alfonso Cano. For our people and for him, we are committed to persist in seeking a political solution to achieve a democratic peace with dignity and social justice. The voice of students, workers, peasants, indigenous and black communities, the unemployed, pensioners, women and middle classes have suffocated to be heard and heeded in Colombia.

With Comrade Alfonso, we remember the deluded:

"Demobilization is synonymous with inertia, it is a cowardly surrender, and surrender is treason to the cause of the popular and revolutionary ideals we cherish and for which we fight for social change. It is an indignity that brings an implicit message of hopelessness to the people who rely on our commitment and Bolivarian proposal."

To die for the homeland is to live forever!
Secretariat of the Central Staff of the FARC-EP