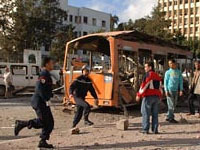 The situation in Algeria continues to aggravate, slowly but surely. One should pay special attention to Kabylie, where terrorist activities have surged since April 2011. Algerian defense officials say that the majority of terrorist acts committed in the country have happened in Kabylie.

The Kabyls make the largest group of the Algerian Berbers. Algeria's Berber population counts from 4.3 to 9 million people, according to official and unofficial sources. About 70 percent of them are the Kabyls, who presumably live in mountainous areas in the north-east of Algeria.

The representatives of Berber movements say that the local authorities deliberately try to decrease their number. Their share in the Algerian population does no make up 16, but 25 and even 30 percent. In any case, they make a big part of Algeria's 34-million-strong population.

Terrorists have become very active recently in the mountainous regions in the east of the country. The authorities are unable to improve the situation. As a result, terrorists attack governmental troops and remain unpunished. It also means that the local population is not being hostile against the terrorists.

It is an open secret that national minorities in general and the Berbers in particular suffer from pressure and discrimination from authorities in practically all Arab countries. Morocco can be an exception from the rule  where the Berbers make up 40 percent of the national population.

However, the condition of the Berber population in Algeria and Libya leaves much to be desired, especially in Algeria. In the beginning of 2001, the Algerian authorities brutally suppressed the Kabyl uprising. Dozens were killed.

The protesters claimed that the Algerian government could not give them any form of autonomy, not even the cultural one, and tried to hamper the development of the Kabyl language.

Activists of the Movement for the Autonomy of Kabylie (MAK) established the interim government of Kabylie. The government was established on June 1 in Paris. The MAK appeared ten years ago, in September 2001, to win autonomy for the region through peaceful methods only. The founders of the movement emphasized that they were not separatists. They believed that the questions of state importance, including the armed forces and the currency, must stay under the supervision of the official Algeria.

The situation has changed ten years later, because the Algerian authorities ignored the existence of the Kabyl problem. Instead, they preferred to approach it from the point of view of the struggle against extremism and turn a blind eye on the national constituent of it.

Algerian officials claim that the leaders of the Berber movement are arm-wavers. In 2002, the Berber language was recognized a "national language." However, the Berbers want to have the official status for their language.

Algerian President Abdelaziz Bouteflika has a chance to prevent the growth of separatist sentiments connected with the cultural autonomy of the Kabyl population.

It is worthy of note that France actively uses the Kabyl issue in its own interests. The country welcomes separatists and autonomists from Algeria. Other Western powers, which are not interested in having a strong and independent country in the north of Africa, act in the same direction.

It is very hard to try to control and manipulate large countries like Algeria. However, it can become much easier if a large country splits into several small ones. Kabylie can become one of them.

The French administration has already tried to dismember Algeria before. There were plans to do it during the Independence war in Algeria in 1954-1962. France tried to play into the hands of the Kabyls to set them against the Arabs. The plan did not work, so one may try to do it again.