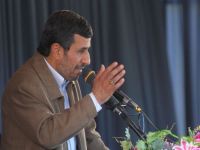 Ahmadinejad warns of global hegemonic conspiracy in the Middle East

The president of the Islamic Republic of Iran, Mahmoud Ahmadinejad, warned on Tuesday of the efforts of global arrogance to deflect popular movements that are taking place in Arab countries in the region. Ahmadinejad, who is visiting in the city of Biryand (in the eastern province of South Khorasan), stated that the U.S. and its allies are the most unpopular governments in the world for the peoples of the region, with their petulant policies.

The president, referring to the terrorism in Libya and the attempt on the part of foreign countries to plunder the riches of this country, added that the Libyan people, always vigilant, will face any nation that tries to ruin their dignity and independence.

The Iranian president added that any decision or action that will allow foreign countries to influence and exercise dominion over Libya will go against the interests of the country, so that the Libyans should govern theit country by strengthening unity and rejecting any foreign interference .

The Iranian authorities asked the nations of the Middle East to be vigilant against possible foreign intervention, and that freedom, justice, dignity and respect are rights inherent to any nation. He also added that nations have the right to choose their rulers and make their own decisions when it comes to running the country.

Ahmadinejad warned leaders of NATO that nations in the region are aware of the wiles the West often uses, and has emphasized that the era of colonialism has ended and will never be repeated. He also urged NATO officials to stop committing "inhuman" acts and leave their bases.

The Iranian president traveled on Tuesday to the eastern province of South Khorasan, accompanied by his cabinet, in the framework of which he is scheduled to make trips to the provinces of Iran.