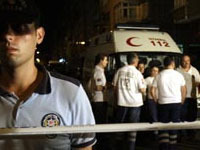 The last attacks against the Chechen separatists in Turkey raised talks about the fact that Ankara sacrificed their interests in order to preserve its relations with Russia. Earlier the supporters of independent Ichkeria used Turkish territory as a rear base. However, this does not mean that Turkey abandoned its previous course in the Caucasus.

On September 16 Turkey was shocked by a murder of three people from Chechnya. They were the deputy of the notorious separatist leader Doku Umarov Berkhazhe Musaev and his two bodyguards, Rustam Altemirove and Zavrbeke Amriev, who, according to several sources, previously followed the orders of Shamil Basayev.  On October 7 there was an assassination attempt on the head of the so-called "Sharia Court of Ichkeria" Shamsuddin (Shamsudi) Batukayev, who sanctioned public executions during the reign of Aslan Maskhadov.

According to several sources, until recently, he was one of the most important representatives of the terrorist network "Caucasus Emirate" of Doku Umarov, and urged to continue the struggle against Russia. We are talking about the very Umarov who would take responsibility for every high-profile attack on Russian territory.

According to Turkish newspaper "Sabah", two ethnic Chechen, one of whom allegedly had a Russian passport, were arrested on suspicion of attempted murder.  The incident caused an outrage in the Western media that were quick to accuse the Russian side of the involvement without waiting for the outcome of the investigation. As "evidence" they used the messages of the Turkish sources that weapons used by Russian special services were utilized in the September killings.

Shamsuddin Batukayev does not rule out that the head of the Chechen Republic, Ramzan Kadyrov, might be behind the events. The latter believes that the events are the result of an internal gang conflict over the terrorist money.

According to Turkish sources, the failed assassin Bahram Batumaev was a customer in the murder attempt of the former Chechen warlord Uvais Akhmadov whom some media called "a kidnapper, hiding in Turkey for many years." However, the day after his arrest this theory was rejected. Akhmadov was freed. Interestingly, the representatives of the Chechen diaspora in Turkey, Ankara, demanded increased security measures at their places of compact residence. Such a statement is not without logic, since very few people are not aware of the feud between former prime minister of Ichkeria, Akhmed Zakayev and the creator of "Caucasus Emirate" Doku Umarov. The representatives of the latter did not rule out the involvement of "the London resident" in the assassination attempt.

However, Zakayev talked about "provocations of the Russian special services against the Chechens", whose agent is allegedly Udugov. The aforementioned Uvais Akhmadov also believes that Movladi Udugov was the reason why he got denunciation of involvement in an assassination attempt.

No matter who was behind the inter-Chechen showdowns, the greatest interest is caused by the position of Turkey regarding the events. For a long time the Chechen and other separatists considered Turkey not only a "safe haven", but a sort of a rear base.

According to several Turkish sources, Musaev Berkhazh arrived in Turkey to heal battle wounds he got in the Caucasus. It is no secret that \many Chechen fighters did this in the First Chechen War. A similar situation was observed during the second campaign. Istanbul's bazaars were selling flags to cheer the "independent Ichkeria". But the most important thing is that, not without the support of the Turkish special services, the so-called "Grey Wolves" troops from Turkey fought in Chechnya. Among the fighters were a number of Chechens whose ancestors moved here during the persecution of "Tsar-Liberator" Alexander II and later, in the early years of the revolution.

Among foreign intelligence agencies trying to destabilize the situation in Russia's in the North Caucasus, Turkey was one of the most active. The center of their aspirations has traditionally (since the Ottoman Empire) been Chechnya.

Of course, recent events have largely disturbed quite numerous Chechen community. As pointed out by the French news agency AFP, referring to "a source in the Turkish community in Chechnya," "the fears and concerns are very real. People no longer have confidence in the government security forces. Some people think that these killings were sanctioned by Ankara".

It is worth mentioning that this is not the first murder and attempted murder of Chechen militants in Turkey. There was the elimination of Gazha Edilsultanov in September of 2008, in December of that year = Islam Kanibekova, and in 2009 Ali Osaev. In addition, many of the representatives of the Chechen community in Turkey linked the incident to the murders of prominent Chechen rebels in Doha (Yandarbiyev) and Vienna (Israilov).

The strange, according to many, silence of the Turkish authorities on this issue only raises additional suspicions about possible changes in the priorities of Ankara.  Chechens living in Turkey suggest that when the murder of the former bodyguard of Kadyrov Umar Israilov took place in Austria, "The EU protested, and nothing like this will happen again. But here no one says anything, the security services did not make it clear.

" Western experts have suggested that the current Turkish government, despite its apparent Islamism, in fact, is pragmatic and does not want to prematurely tarnish relations with Moscow, which supplies Ankara with at least 60 percent of gas in the country.

However, no matter how the relations between Russia and Turkey develop at the present stage, we should remember that the sympathy of the Turkish leadership is fickle. They have a consistent strategic interest in the Caucasus, which has often become the scene of the Russian-Turkish wars.

In the 18-19th centuries the Russian empire, in fact, squeezed the Ottoman Empire from the North Caucasus and Transcaucasia. Now, when Erdogan is doing everything to regain its former influence in the previously lost Turkish territories, there is no doubt that Turkey will continue the existing Caucasus policy, in which the interests of various kinds of separatists are only a tool for achieving this goal.