Ahmadinejad reacts to the USA: ' Murder is your thing' 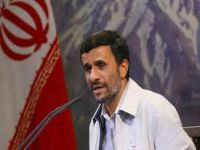 Iranian President Mahmoud Ahmadinejad reacted Sunday to the release by the U.S. government that accused Tehran of sponsoring a terrorist plot in the United States and used the occasion to blame Washington for the frequent bilateral crises.

"The Iranian nation does not need educated articulate plans of murder. Murder is your thing," said Ahmadinejad, speaking at the Iranian Parliament, The Iranian President's remarks were reported by the official news agency, IRNA.

The onslaught from the leader responds to U.S. charges that the Islamic Republic would be behind a plot to assassinate the Saudi ambassador in Washington, Adel al-Jubeir. Ahmadinejad said the U.S. is seeking "to create a new crisis every day with Iran, accusing it of terrorism." For him, the American accusations are merely an attempt to try and stop the development of Iran.

The Ministry of Foreign Affairs of Iran said in a statement that the U.S. accusations "have no legal basis" and they only seek to "exacerbate tension in the region" in the Middle East and "undermine international security."

"They unilaterally announce charges against a resident (Iranian) in the United States, without providing documents, and create a media campaign against Iran that has no legal basis," the Ministry said.

For Iran, Washington should have consulted Tehran about its suspicions. "But the U.S. government ignored the express request of the Islamic Republic which it did, against international conventions," says the statement.

A reminder that the west, the United States and Israel in particular, have accused Iran of plans to produce nuclear weapons, which Iran completely denies. Iran is a signatory to the Nuclear Non-Proliferation Treaty, while Israel has refused to sign the treaty, and is also in possession of a large nuclear stockpile itself, remaining completely unchallenged.

Leaders of those countries have also threatened Iran with military action, stating that "all options are on the table/" Numerous sanctions have also been imposed on Iran, while there are none on Israel.

Iran's representative to the IAEA, the organization responsible for monitoring compliance made the following statements:

"Iran has repeatedly announced that it opposes nuclear weapons and that all its activities pursue peaceful objectives and are carried out under the IAEA's full surveillance. As it has been repeatedly proven over the past eight years, claims about Iran's nuclear arms are baseless," he said, adding that "the international community has been witnessing such unfounded allegations."