Arab revolutions may lead to war against Israel 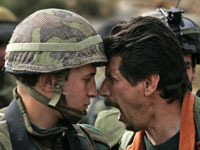 The color revolution in Egypt caused negative reactions in Israel from the very beginning. The staunchest followers of democratic values welcomed the national riots that targeted the tyranny of former President Hosni Mubarak.

However, many Israeli politicians and public figures, who are capable of calculating the political consequences of the possible regime change in Egypt, were concerned about the massive riots on Cairo's Tahrir Square. Mubarak's government was friendly with Israel.

The stability on the borders with the western neighbor has been extremely important for Israel during the recent 30 years. Israel's army was always prepared for subversive activities conducted by Lebanon and Syria. Israel's Defense Forces build defense constructions and mobilize extra forces to defend its northern territories. As for Egypt, Israel has never been concerned about the country at this point.

Anyone who has ever been to the southern border territories, knows that those were very quiet and safe places in Israel. It goes without saying that Egyptian extremists tried to conduct subversive activities against Israel. However, they were always very cautious during Mubarak's stay in power.

The state of affairs has changed drastically after the revolution. The dramatic events around the Israeli embassy in Cairo caused quite a stir in the whole country. Egyptian military structures have not done much to prevent the barbarian action of the Islamists. After the incident, the relations between Israel and Egypt continued to worsen.

Tel Aviv is having hard times now on the diplomatic front. Turkey continues to put pressure on Israel in an attempt to make Israel plead guilty of attacking the Freedom Flotilla. In addition, the country has too many problems with Palestine.

The political problems have led to the economic ones. Egypt has recently announced a forthcoming rise of gas prices. The information about the preparation of the new agreement about the export of natural gas to Israel appeared in the beginning of October.

Egyptian officials said that the prices would be raised to meet the level of world prices on fuel. However, one should bear in mind the fact that soon after the August events on the Sinai Peninsula, the "coalition of Egyptian revolutionaries" threatened to cease gas shipments to Israel.

Now Benjamin Netanyahu's government fears new provocations on the part of Islamic radicals. The country was forced to strengthen its borders with Egypt. It appears that the Arab-Egyptian conflict has been aggravating in all directions.

The "Arab spring" has not brought anything to Israel yet. The country only had to increase its defense spending. If Bashar Assad's regime is toppled in Syria, Israel will have to pay even a higher price for the "democratization" of Arab countries.

Technically, Israel would only benefit from the appearance of Western-style democracies in the neighboring Arab states. The question is to which extent it can be real, even if the sitting leaders would be toppled one after another. Syria's example is especially indicative at this point.

Assad's regime has been hostile against Israel for many years. The two countries are still staying in a state of war despite multiple attempts to start negotiations via the mediation of the United States and Europe. The Golan Heights problem is far from being solved. The change of power in Damascus could therefore ease tension between the countries.

However, if Bashar Assad leaves, Syria is not going to turn into a pro-Western democratic country in an instant. The country will not be able to conduct a constructive dialogue with Israel. The "democratic" processes in Egypt are very slow.

The worst scenario for Egypt and Syria is the possible rise of Islamists to power. If it happens, it will mark the end of the era of peace initiatives in the Middle East. It would also mean the appearance of a direct military threat for Israel.