Little girl dies on pedestrian crossing with her mother in Russia 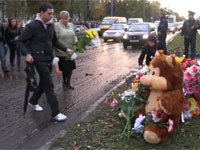 A 20-year-old female resident of the city of Bryansk, who killed a three-year-old girl and seriously injured her mother in a terrible car accident, was placed in a mental institution. The driver developed suicidal hysteria because of the accident, the press service of the Interior Ministry in Bryansk said.

The driver fell into violent hysterics with suicidal sentiments soon after the accident, RIA Novosti said. The woman was placed under medical observation at a local hospital for mentally unbalanced individuals.

Sonya Sivaeva, a girl aged only three, died in the car accident on October 7, at about 5:15 p.m. The accident took place on the crosswalk. A Volkswagen Passat, driven by the 20-year-old woman, ran over the woman who was crossing the road with her daughter. The woman did not pull over in front of the crossing and was driving the car at high speed. There was no zebra on the crossing, but the adequate road sign was visible for all drivers.

The strong impact sent the woman and her little daughter flying for meters. The girl died on the scene, whereas her mother was hospitalized in a critical condition.

The tragic car accident received an extensive public response when the video of the accident appeared on the Internet. Internet surfers hail curses on the driver, others presumed that the female driver was a relative of local prosecutors, which could help her avoid punishment.

Many bloggers and members of social networks say that the killer must be lynched. The police was forced to take measures to protect the woman and her relatives from aggression.

Hundreds of Bryansk residents arranged a spontaneous meeting (click here to see the video) yesterday in memory of the little girl. The people were saying that the driver must be punished accordingly.

The driver, whose name has not been exposed, was charged with involuntary manslaughter. She may face a prison term of five years.