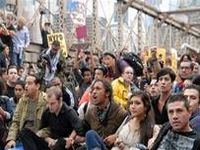 Thousands of Americans occupied Wall Street without violence  - an epicenter of global financial power and corruption. They are the last rays of light in a new movement for social justice that is spreading rapidly around the world: from Madrid to Jerusalem, and 146 other cities, with others joining all the time. But they need our help to triumph.

The families of workers are footing the bill for a financial crisis caused by corrupt elites. The protesters are demanding a real democracy, social justice and fighting corruption. But they are under strong pressure from the authorities and some media are portraying them as extremists. If millions of us around the world support them, we will increase our determination and show the leaders and the media that the protests are part of a massive movement for change.

This could be our year, our 1968 of this century, but to succeed it must be a movement of all citizens of all social classes. Click to join the campaign for real democracy. A giant counter will be erected in the center of the occupation in New York and when one of us signs the petition, it will be shown and relayed live on the petition page:

The worldwide wave of protests is the latest chapter in the history of this year's global power of the people. In Egypt, people went to Tahrir Square and overthrew their dictator. In India, the fast of a man brought millions onto the streets and the government was forced to give in - winning a real action to end corruption.

For months, Greek citizens protested without a break against unfair cuts in public spending. In Spain, thousands of "angry" protesters defied the ban on pre-election demonstrations and set up a protest camp in Sun Square to speak out against political corruption and government manipulation of the economic crisis. And this summer, Israelis built "tent cities" to protest against rising housing costs and for social justice.

These national issues are linked by a narrative of global determination to end the connivance of the elites and corrupt politicians - that in many countries helped cause a damaging financial crisis and now they want the families of workers to pay the bill. The mass movement that is responding to this can only ensure that the onus of the recession does not fall on the most vulnerable, but it can also help to improve the balance of power between democracy and corruption.

In each revolt, from Cairo to New York, the request for a responsible government that serves the people is clear and our global community has supported the power of the people around the world, wherever it has appeared. The time when politicians were in the hands of the few corrupt is ending and, instead, we are building real democracies, of, by and for the people.