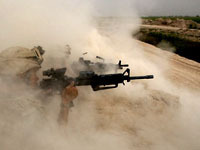 October 7 marked ten years since the beginning of the US-led operation in Afghanistan. What results have the United States and its allies achieved in the operation? Most of Afghanistan's territory was controlled by the Taliban movement in the autumn of 2001. The movement seized the country's capital, Kabul, and made enemies retreat to the north.

After the 9/11 attacks, the USA demanded the Taliban should deliver prime suspect Osama bin Laden. The Talibs said no having claimed that the Americans could not present convincing evidence to prove their point.

In return, the USA attacked the country on October 7. As a result, the Talibs left Kabul on November 13. By the end of November, the Taliban was controlling only the southern part of the country with the stronghold in Kandahar. By the end of the year, the American and British forces seized the Tora Bora complex of caves in the south of Afghanistan, where, according to the CIA, Bin Laden was hiding.

Ten years later, the Pentagon officials acknowledged that NATO had failed to achieve any improvement of the state of affairs in Afghanistan by the autumn of 2010. Independent experts said that the occupation forces had been losing the control over the situation in the war-torn country.

In October 2010, Mujahedeens stated that they were controlling 70 percent of the Afghan territory. NATO has not been able to change the situation for the better in 2011 either. Quite on the contrary, the situation in the north of the country has been getting worse recently.

In addition, the Talibs have been liquidating prominent Afghan leaders. They killed President Hamid Karzai's brother in July and Rabbani - in September.

The considerable increase of the heroine production has become one of the main consequences of the Afghan war. The war in the country continues, and it seems that it is not going to end ever.

Nevertheless, US officials still say that they are not leaving from the country in 2014, as was originally planned. This seems to be very strange indeed, taking into consideration the destruction of Osama bin Laden, which supposedly took place in the beginning of May.

A lot will depend on the development of the situation in the United States. Many common Americans are highly concerned about the growing spending on the Afghan war under the conditions of the ongoing financial crisis.

One of the main failures, which the USA and its allies experienced in Afghanistan, was the inability to win the hearts and minds of the Afghan people. Moreover, anti-American sentiments in the country have been growing steadily. On may say that the allied troops repeated nearly all Soviet mistakes, and aggravated the situation even more.

The local population supports the Taliban because of the occupants' actions. The aviation of the alliance attacked wedding and funeral services and tried to "build peaceful life" in the country.

The Americans and their allies say that they promote democracy. However, it appears that they can fully understand the meaning of the saying "when in Rome do as the Romans do."

The majority of the Afghans were infuriated with the attempts to have Afghan women involved in the public life of the country. The local people take such moves as an intention to destroy Afghan family values. The majority of Afghan women do not want to change their lifestyle.

As a result, Afghan people now believe that the United States and its allies came to the Afghan land to destroy Islam.