For US, attacking Syria would be 'perfectly normal practice' 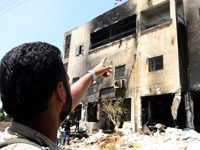 The United States openly supported the attack on Syria. The State Department spokesman Mark Toner blessed terrorist attacks against the Syrian military, calling them a "perfectly normal practice." The reaction of the Syrian foreign minister was immediate: these statements are the evidence that the U.S. supports the "armed terrorists" attacking the army units.  According to the Syrian ministry, such support clearly demonstrates that the U.S. is engaged in this development and is pushing the armed groups to violence against the Syrian military.

The official Damascus sees the statement of Mark Toner as an irresponsible call for terrorist attacks and the establishment of anarchy, which serves the foreign interests and is offensive for the Syrian people.

The sharp deterioration of the US-Syrian relations coincided with yet another incident involving a U.S. ambassador to Syria. On September 29, according to the Western media, an aggressive crowd of supporters of Bashar Assad allegedly attacked the head of the U.S. diplomatic mission in Syria.  If it had not been for a reporter from the Information Agency Xinhua who happened to be nearby, the incident would have looked like an attack. However, the Chinese journalist who was on the scene provided a completely different description of the incident. According to him, the "attack" on U.S. ambassador Robert Ford was preceded by his car hitting a Syrian who sustained injuries of moderate severity. Only after that the crowd began to throw things at the diplomat's car.  "We threw eggs, tomatoes and potatoes at him because we despise him. America should care about its own problems and leave us alone," said in an interview to Xinhua a participant of the "attack."

It is unknown what would happen to the American ambassador if the Syrian police had not interfered. According to Chinese journalists, the diplomat was aided by as many as 10 police cars that dispersed the angry crowd not without difficulty.

Another important detail: according to the Chinese and Syrian journalists, Robert Ford was on his way to meet with the leader of the outlawed Syrian party. They meant the Syrian "Muslim Brotherhood" that tarnished their reputation back in the late 1970s by the mass killings of the Alawite, including officials, soldiers and their families.

The peak of their activity was a rebellion in Hama in February of 1982 and the assassination of then-President Hafez al-Assad of Syria, who took revenge. The surviving fundamentalists took refuge in the West, waiting for their finest hour. Apparently, now, 30 years after the destruction of Hama, it was made clear to them that their time has come. They received the warmest treatment from the UK where one of their headquarters was located.

The defeated "brothers" have retreated deep underground. All mosques in Syria were placed under strict control of special services, and sturdy barriers were built in the way of the Islamists. However, Assad Jr. has gradually eased the control. According to the Syrians, more or less stable control was preserved over the largest mosques, while the smaller ones became the centers of the radical opposition that started to prepare for the revenge for 1982. Obviously, it was a mistake of Assad junior. Incremental and timid attempts to liberalize the economy should not have been accompanied by the weakening of the pressure on those who wanted to fill Syria with blood.

The origin of "Muslim brothers" is not that straightforward. They appeared as a reaction to the Western influence in an attempt to protect the real values from its corrupting impact. This is the attitude that dominates among many Arabists. Someone adds to it "a greater risk of the atheistic Soviet Union. " Yet, many Arabs believe that the "Muslim Brotherhood" is the brainchild of the Western, including British, intelligence agencies, aimed at the destruction of the Arab unity.

In any event, today there is a surprising similarity in the views of the "Brothers" and the main proponent of the global democracy, the United States. It was not the first time when an American ambassador was trying to meet with the "Brothers". For example, during the recent unrest he visited their old stronghold of Hama in the company of his French colleague, where they urged the locals to topple Assad.

The pictures taken at the scene present a touching image of an obvious unity between the most democratic diplomatic envoys in the world and the crowds of bearded men without mustache. This combination is one of the hallmarks of radical Islamists. Incidentally, their slogan in Syria is "Alawites - to the grave, Christians - to Beirut!" Inspired by an open support of the influential Western powers, Hama Islamists gave armed resistance to the Syrian forces, in which, according to various sources, between 140 and 300 were killed. However, the order of the main stronghold of the Syrian instability was restored.

This is obviously not a part of the U.S. plan, and it does not abandon its attempts to destabilize the situation. The recent incidents, the scandalous statement of Toner and Robert Ford's attempt to meet with the leaders of Islamic radicals should be viewed as an open declaration of war against Syria.

In response, Damascus should be courageous and at the very least remove the U.S. ambassador from the country for sedition. The head of the U.S. diplomatic mission has more than enough means to do so. Robert Ford met with the leaders of the terrorists. The least he could do for them is to give them a bag of money that may be allocated for paying for the killings of the Syrian military virtually blessed by the U.S. Department of State. The elimination of this channel would support terrorists, primarily in the interests of the regime itself.

Of course, the expulsion of the American ambassador will have consequences. Unfortunately, the Syrian leadership still believes that it is possible to avoid the development of the situation according to a negative scenario. Apparently, the official Damascus fears that worsening of the diplomatic relations can be used to commit further provocations against Syria. However, it has long been clear that the fight has already been paid for, and that the West is simply waiting for the completion of the operation against al-Gaddafi to take more serious steps against Assad.