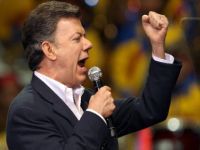 The armed struggle of the Colombian people is ALSO OUR FIGHT

The international character of the Colombian armed conflict

During the eight years of the narco-paramilitary President Alvaro Uribe Velez (the 82nd drugs capo listed as such by the Defense Intelligence Agency (DIA), the Pentagon), he devoted all his energies in trying to end the armed uprising of the FARC Communist guerrillas -People's Army and to "domesticate" it (as a simple internal problem) and a political and social conflict. He treated them with a reductionist viewpoint, as if it were a delinquencial expression and connected to a supposed "fight against terrorism."

Greetings from the Secretariat of the FARC-EP
Commander Shepherd Alape

Colombia is bathed in blood after a year of Santos leadership

SOME FIGURES OF STATE TERRORISM IN COLOMBIA:

The Colombian state has the best armed military in the world beside the U.S., along with Israel and Egypt: a genocidal army and police force, an army accountable, by the infamous Omega Force called Plan Colombia, the largest mass grave on the continent: 2000 (two thousand) missing corpses

- The Colombian army practiced the killing of civilians to justify its huge military budget: to assassinate Colombian civilians and then present their bodies as "guerrillas killed in combat" in an assembly of macabre media. They often choose their victims from among the rural population or between the poorest suburbs of major cities. These murders, euphemistically known as "false positives" are also committed against trade unionists and political opponents. There are at least 3,200 documented cases of killings of civilians; 99% of the perpetrators enjoy impunity and 100% of the masterminds.

- In Colombia, they murdered 60% of all the trade unionists killed worldwide by paramilitary death squads, both military and political.

- Colombia's "record" of political prisoners, more than 7,500 men and women, the vast majority are civilians.

The state crime of forced disappearance is another horrendous "record," because in Colombia the figures of torture and disappearances exceeds the Southern Cone of dictatorships.

- Colombia is the country with the most refugees (displaced people) in the world, along with Sudan: 5.2 million people forcibly displaced by paramilitary squads, who steal the land of small farmers on behalf of the big landowners and multinational companies: 40% of Colombian territory is being auctioned for multinational mining.

- While intensifying extermination of the opposition and the critical thinking, impunity for genocide and repressive apparatuses of the state exceeds the unthinkable: Recently the government of Juan Manuel Santos pardoned more than 31,000 (thirty-one thousand) narco-paramilitaries (Law 1424).