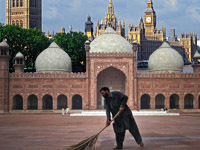 A large terrorist act, prepared by Islamists, has been prevented in Britain. This is another reason to pay attention to the problem of the Muslims in this country.

On September 26, the British police reported about the arrest of six representatives of the Muslim community in Birmingham. It was said that those people were supposed to become suicide bombers. They were supposedly planning to conduct a series of terrorist acts in England.

It was also said that some of the detainees had traveled to Pakistan to receive terrorist training there. All the detainees are not even 35.

All details of the case have not been unveiled, but it is obvious that British special services indeed prevented a large terrorist act in the country. Six years ago, a group of suicide bombers - British citizens by the way - organized four explosions in London that killed over 50 people.

Nowadays, there are as many as two million Muslims in Britain (over 3 percent of the population). They mostly live in the largest cities of the country - London, Birmingham, Manchester, Leeds and Newcastle. About one million Muslims live in London. There are 1,200 mosques in Britain, although other sources of information say that the number of mosques is larger - up to 2,000.

The first waves of Muslim migrants appeared in England 200 years ago. Afterwards, Muslim soldiers and officers, who took part in WWI and WWII, settled in the country as well. As for the recent decades, the Muslim migration to Britain presumably consisted on cheap labor force. The percentage of Muslims in Britain was growing steadily due to the high birth rate in Muslim families.

The largest ethnic group of Muslims comes from different parts of the former British India (Pakistan, Bangladesh and several Indian states). Most of those people are highly religious. Muslim women cover their face and body with special clothes known as headscarves and burqas.

The natives of Arab states, the north of Nigeria and the east of Kenya are just as zealous. The process of their integration in the European community is much more complicated than the integration of the Turks in Germany or the Arabs in France.

The geography of the British Muslim community has expanded during the recent 30 years. Many adversaries of the regime of ayatollahs in Iran fled to Britain. The country also attracted refugees from Iraq and Somalia, as well as migrants from the Northern Caucasus and Bosnia. The political adversaries of the leaders of Egypt, Libya, Tunisia and several other countries, who have been toppled this year, found shelter in Britain as well.

Natives of Muslim countries can be found among England's most prominent entrepreneurs. It would be enough to mention the name of Mohamed Al-Fayed of Egypt - the might-have-been father-in-law of late Princess Diana.

A number of respectable Arab newspapers is published in London too. More than ten deputies of the House of Commons today are natives of Muslim states.

The majority of British Muslims do not want to adopt the traditions of the local population. According to WikiLeaks, up to 40 percent of Muslim students in Britain want to live under shariah laws. As many as 32 percent of them are ready to justify a murder committed in the name of Allah. More than a half of the polled said that they would like to see the Islamic Party in the House of Commons of the British Parliament.

Many members of the Muslim Brotherhood found shelter in the British capital. This radical organization is still banned in many Arab states. The administration of the Syrian division of the organization moved to London in 2000.

Many imams of British mosques condemn Islamic radicalism. There are exceptions, though. Abu Hamza al-Masri, the imam of the mosque in the north of London (Finsbury Park), openly supported terrorist acts in Russia. He moved to Britain from Egypt, where he could face a prison term. He also collected the funds to send gunmen to Chechnya, Afghanistan, Iraq and Palestine. The imam was arrested in 2006, but he was sentenced to only seven years in jail. The decision left many Britons perplexed.

Other Muslim organizations that conduct their activities in Britain - Al-Muhajiroun, for example - urge their followers to support the fighters for freedom in Palestine, Kashmir, Chechnya and Bosnia.

The above-mentioned arrests showed that the situation with the integration of Muslims in the British community leaves much to be desired. Prime Minister David Cameron acknowledged that in February of this year.