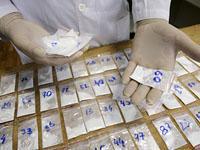 There are numerous unconventional ways to transport drugs. Although police all over the world on a daily basis invent new ways to control drug trafficking, daily turnover of drugs has been increasing in all regions of the planet. Are drug lords smarter than the police? Pravda.ru conducted its own investigation on this matter. This is in no way a scientific study as we merely researched press clippings on this topic. We found out that narcotics police is clearly not less clever than drug dealers, couriers and other criminals. The number of reports of successful arrests of traffickers grows consistently. Police in many countries solves the puzzles of drug smuggling that makes you wonder - how do they do it?
The police do not share their secrets, which is understandable. Obviously only solved crimes make it to the press while many remain unsolved.

Drug traffickers are extremely resourceful. Recently Australian police seized over 270 kilograms of cocaine hidden in a batch of lawnmowers from Brazil. The price of these drugs on the black market could be as high as $200 million. Three people were arrested - one Australian and two citizens of China. The investigation in Melbourne and Hong Kong will determine who came up with the brilliant idea of ​​transporting cocaine in lawnmowers.

Kaliningrad regional administration of drug control reported an extraordinary greeting card that for some reason was fished out of the flow of mail in a local post office. The card was sent from the city of Bryansk and has safely travelled through three border controls. The envelope was opened and cannabis was found hidden in it. The drug was carefully attached to a bright glossy sheet.

An unusual drug trafficking method was discovered by the Criminal Investigation Department of Internal Affairs. They found that postal parcels arriving to Russia contained not drugs, but seeds of cannabis and other narcotic plants. When checking the recipients of such parcels, investigators encountered full-fledged greenhouses. Timely information about the seeds exchange came early this year.

Ordering and money transactions were carried out online, and the delivery was carried out though international mail. The seeds were hidden in magazines, booklets, and digital media. The parcels were sent from Spain, Italy, Thailand, India, Mexico, and the United States.

Investigators initiated a large-scale special operation. Upon delivery of the packages to the recipients, the investigators found entire gardens. For example, in Orenburg region, a man and his two sons had an established clandestine business - the investigators seized 115 bushes. Investigative operations were conducted throughout the country. 29 laboratories and greenhouses equipped with control devices and automatic watering and climate control systems were shut down. Over 800 cannabis bushes were destroyed.

According to statistics, the most frequent method of drug smuggling is intracavitary one. That is, a courier swallows a capsule with a drug, and then waits until it comes out naturally. Not that long ago such "swallowers" were detained at Pulkovo and Sheremetyevo Airports. The "catch" was one kilogram of heroin. At Pulkovo airport in St. Petersburg a Tajik citizen was detained who tried to bring heroin to Russia in his intestines.

As reported to Pravde.ru by the press service of the North-West Customs Administration, the medical examination confirmed 88 containers of heroin in the gastrointestinal tract of the Tajik with a total weight of 658 grams. The same day in the Moscow international airport Sheremetyevo customs officers prevented an attempt to import 300 grams of heroin from Uzbekistan into Russia. Interestingly, the customs and police investigators never reveal how they are able to identify drug dealers and "swallowers".

However, ordinary mortals do not need to know this. The customs is becoming increasingly more successful at identifying "swallowers". This method of smuggling of illicit drugs was considered very effective, but now it is losing its popularity.

Since the beginning of this year, Pulkovo customs detained five drug dealers - "swallowers", all citizens of Tajikistan. The total weight of heroin seized is 3674.45 grams.

Traffickers from other countries have much better imagination. For example, in the Dominican Republic last year a batch of zucchini stuffed with 25 kilograms of cocaine was found. Dealers tried to bring 407 vegetables stuffed with drugs to New York. According to some Internet sources, some godless drug traffickers infiltrated Bible pages with liquid cocaine and tried to bring the sacred book across the border. This case was solved by police in Colombia.

Women are no less inventive. A young drug dealer in Florida hid drugs in her intimate body parts.

A courier in Bashkortostan put 732 kilograms of heroin and opium in cabbage loaded in a "KAMAZ" truck. The drug dealer got into a car accident, the truck rolled over and the drugs were found by traffic police Last year in Bryansk two men were arrested while trying to smuggle drugs sewn into a stuffed dog and a turtle. The stuffing was weighty - 115 grams of heroin and 100 grams of methadone.

Another 22-year-old student of a Moscow university bought a batch of "ecstasy" pills, put them in a plastic bag and then placed the bag into a bottle of shampoo. Drugs were intended for distribution in the nightclubs of Moscow. While there are multiple ways of smuggling drugs, one day the traffickers will be caught and punished.