Serbia's authorities side with whom? 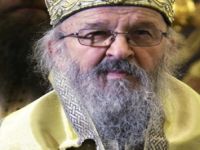 There are times when a wave of madness sweeps through the international community, times when things cease to make sense any more, when logic is defied and when we question whether everything and everyone has lost their sanity. In northern Kosovo, foreign forces are colluding against Serbs and what are the Serbian authorities doing?

The answer to the question is crystal clear: they appear to be working with them. True, the European Union must have presented a long and humiliating list of demands to Belgrade, yet the capacity which the Serbian authorities demonstrate in their resilience and stamina as they stand bent over with their trousers down, is staggering.

The latest incident happened yesterday as the Serbian Orthodox Bishop Artemije carried food aid for the Serbs barricading their checkpoints in the Serbian privince of Kosovo, together with a group of Orthodox monks and nuns... and the vehicles in which they were travelling were intercepted by the Serbian police who stated they did not have the right to cross the checkpoints.

How can the Serbian police prevent Serbian Orthodox monks crossing into Kosovo and Metohija, which is under international law a province of the Republic of Serbia?

What is worse, the Bishop was the victim of police brutality. Not only was he physically prevented from entering Kosovo I Matohija, but he was forcefelly removed to Belgrade. Instead of enjoying the freedom of movement to visit his people in the diocese of Serbian Kosovo, his freedom of movement was denied to him, not by Croatian elements in KFOR, not by Albanian terrorists led by their organ and drug-trafficking masters who the EU and NATO love so much, but by the Serbian authorities themselves.

Apart from this incident, other groups of monks were prevented from travelling to Kosovo. They were surrounded by the police and forced to turn back.

This is the freedom and democracy exercised by President Boris Tadic's Serbia today. Yes, the world has gone stark raving mad.

To the Serbian authorities - bend over further, your masters will enjoy it more.